WARNING: Post not suitable for people ALLERGIC TO THE COLOUR PINK or those with a PHOBIA OF DUCKS. If you have either of these conditions, read at your own peril!!

Still reading? Hopefully that means you’re not going to break out in hives when you see the excesses of pinkness in this post. Or run screaming in terror at about the halfway mark when the ducks make their virtual entrance. So… we’re good? Excellent. Brace yourself for the pink extravaganza that was my daughter’s 2nd birthday party!

It all began with these adorable pink circus-themed invites found here on Etsy, available as a personalised digital file ready to download and print. The colour on the screen is quite dark – in real life the pink stripe is lighter and the invites have a softer, more vintage look.

Let’s take a closer look at this extravaganza of pinkness. This is how I laid out the party table. Just ignore those tablecloth wrinkles… I happen to be allergic to ironing. It’s a genuine condition. If ever think about ironing something, I get this strange lethargy and have to sit down and watch TV until I recover. 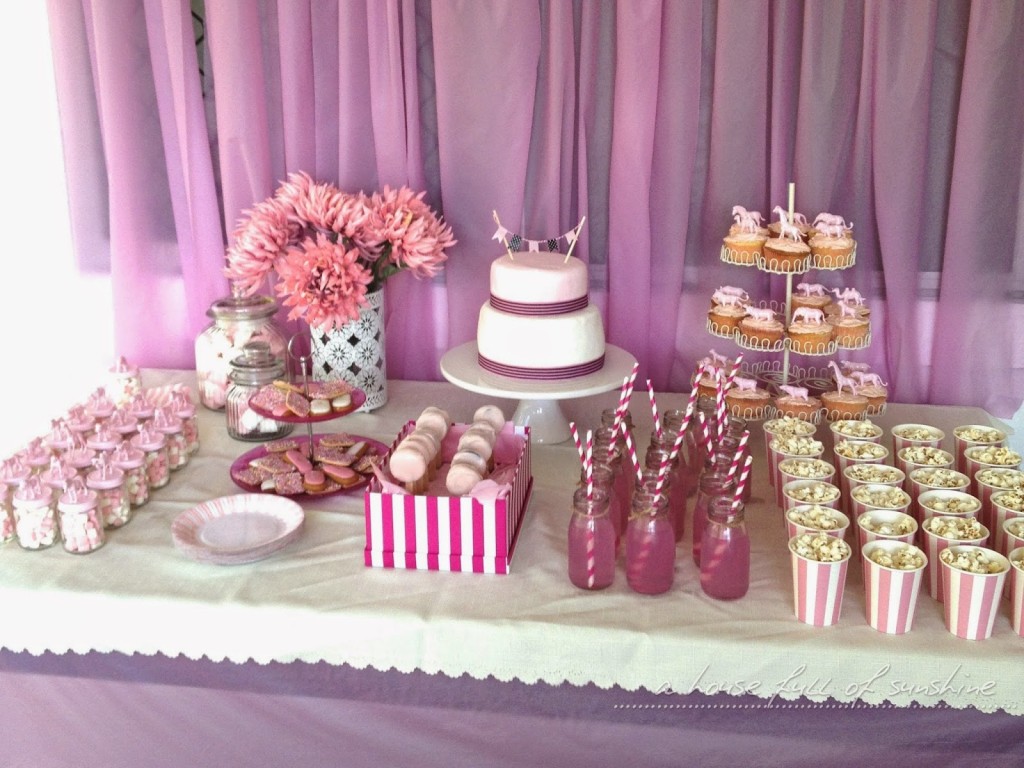 I made the “backdrop” from a roll of disposable plastic tablecloth that I pleated and taped to simulate a ruffled curtain. 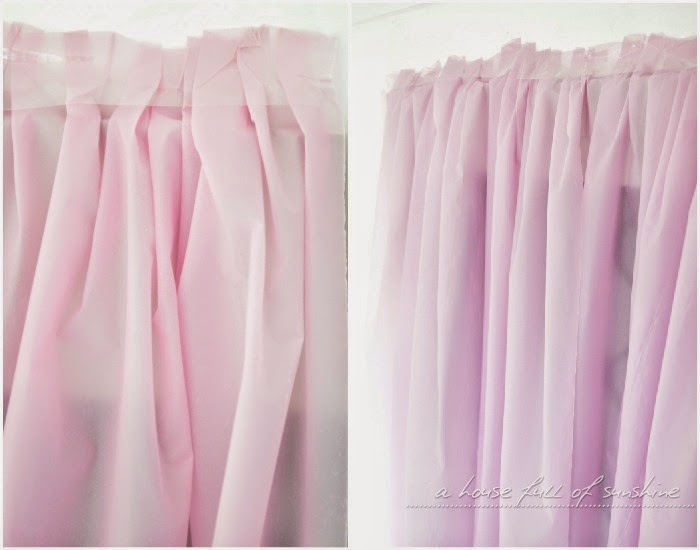 I found pink and white striped paper cups at The Reject Shop for the popcorn. 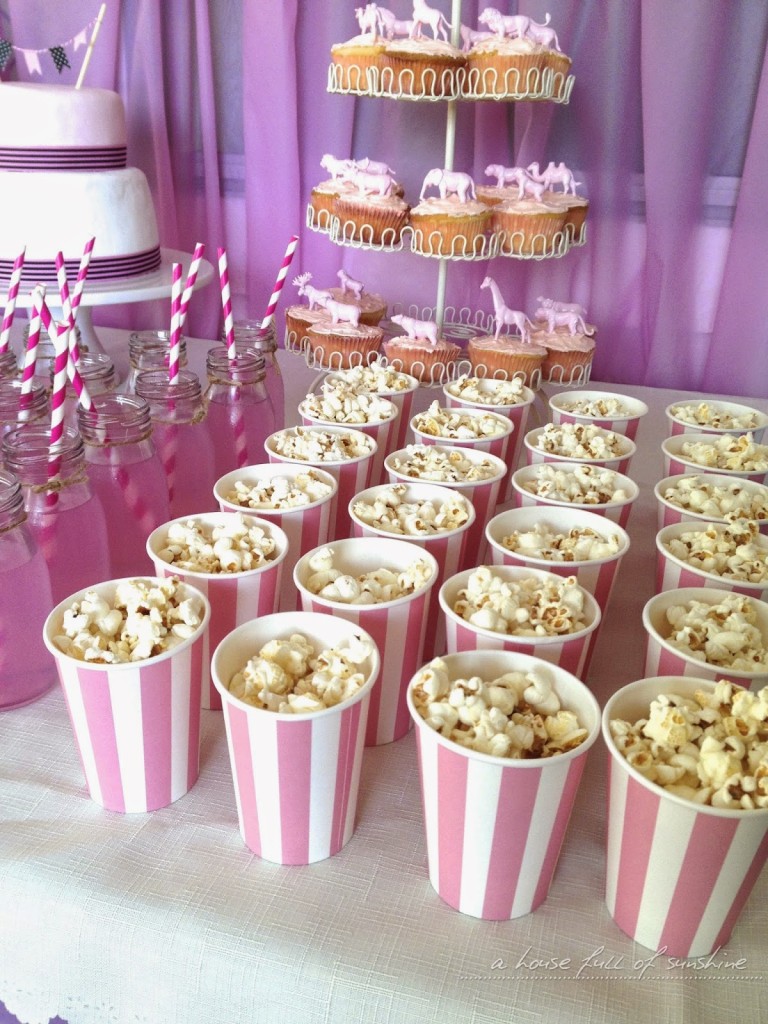 We had glass bottles of pink lemonade with pink and white striped straws. 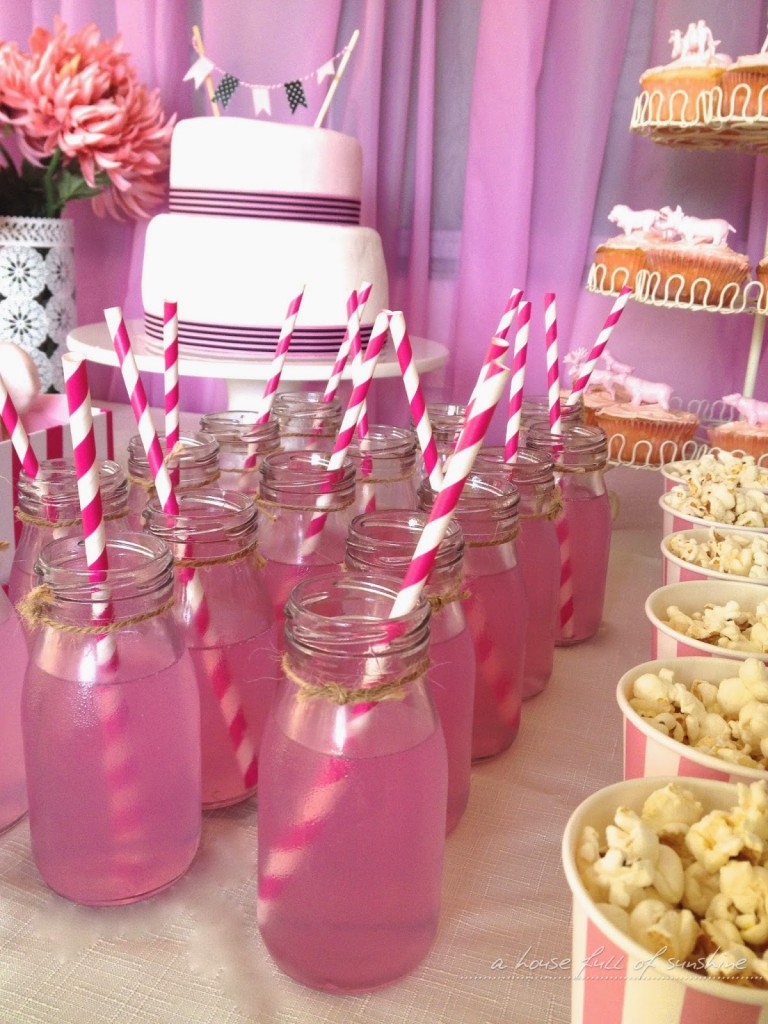 A pretty tiered glass dish holds some pink and white iced biscuits for our little guests to snack on. 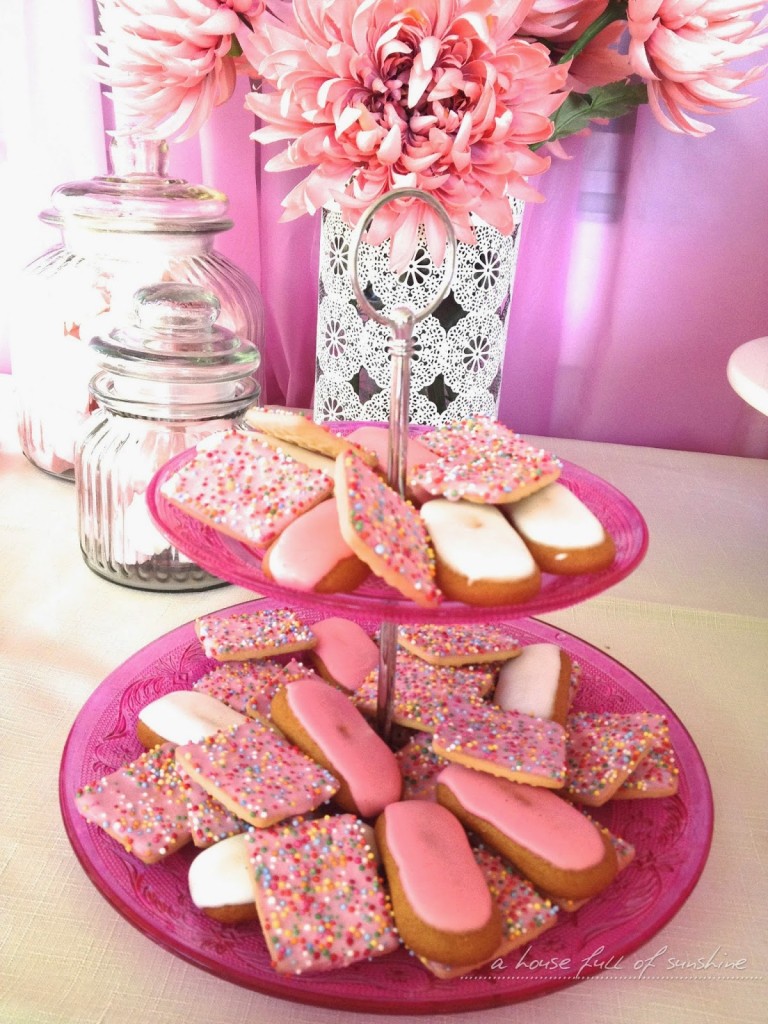 I made a two-tiered birthday cake with a washi-tape bunting topper. If you missed the tutorial for how I made this cake using my own hand-made marshmallow fondant, you can check it out here! 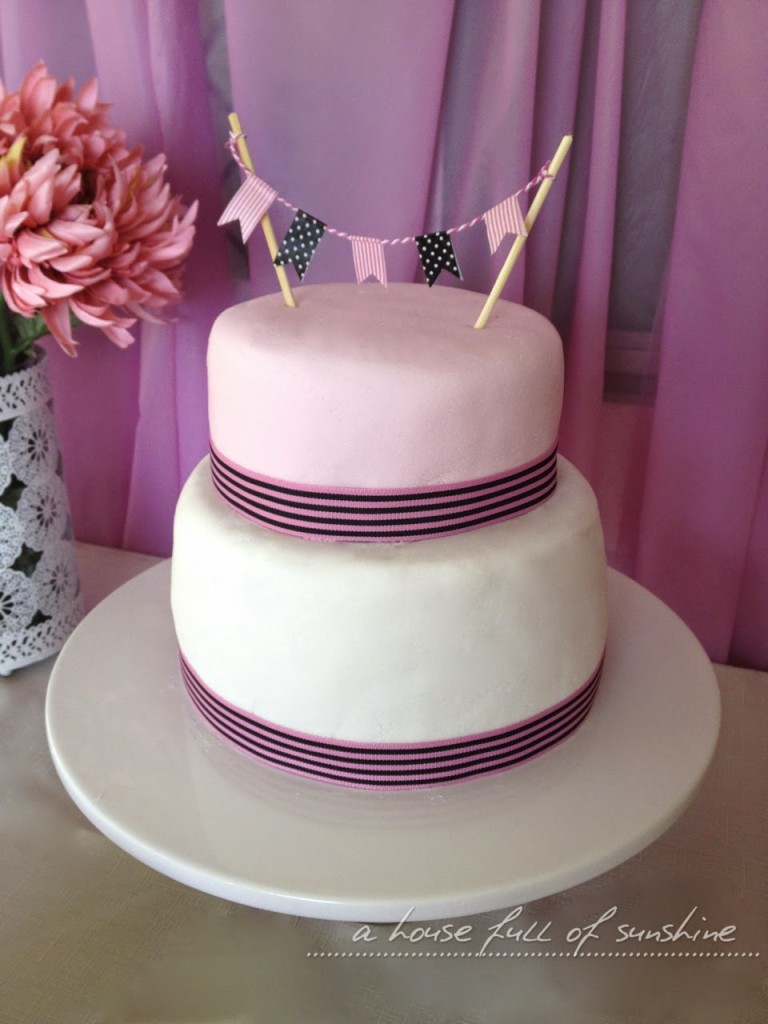 We had pink and white marshmallows in a glass jar to cater for any mid-party marshmallow cravings, and the kids took home their own cute jar of mini marshmallows as a party favour. 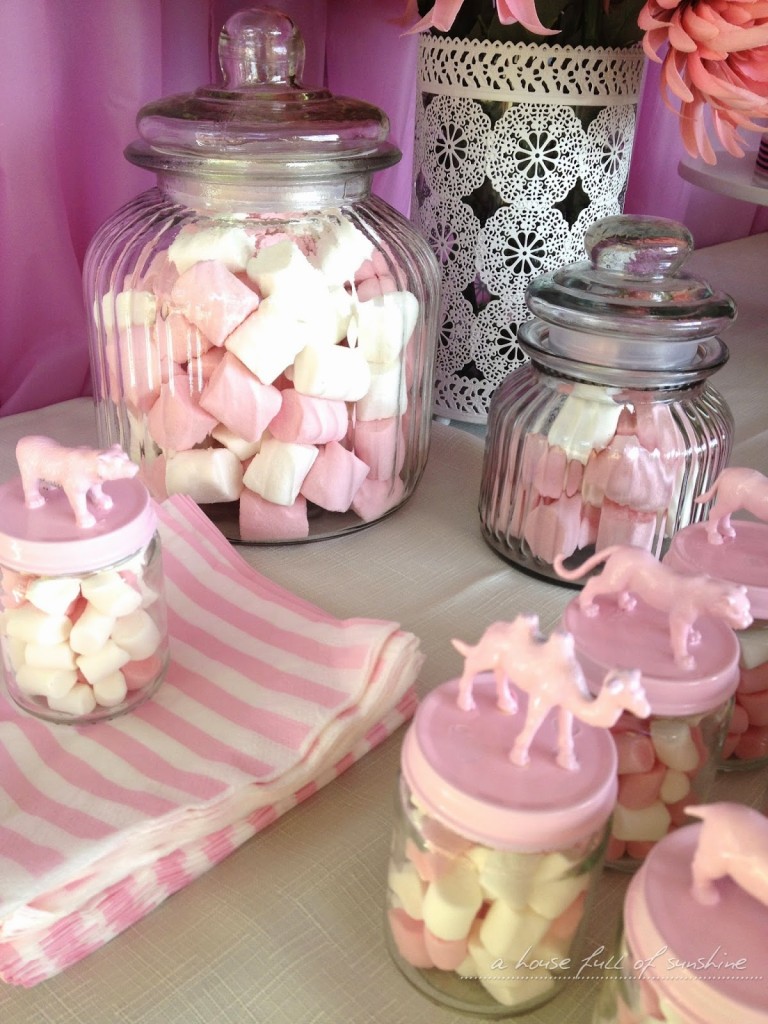 You can see the tutorial for how I made the party favours here. 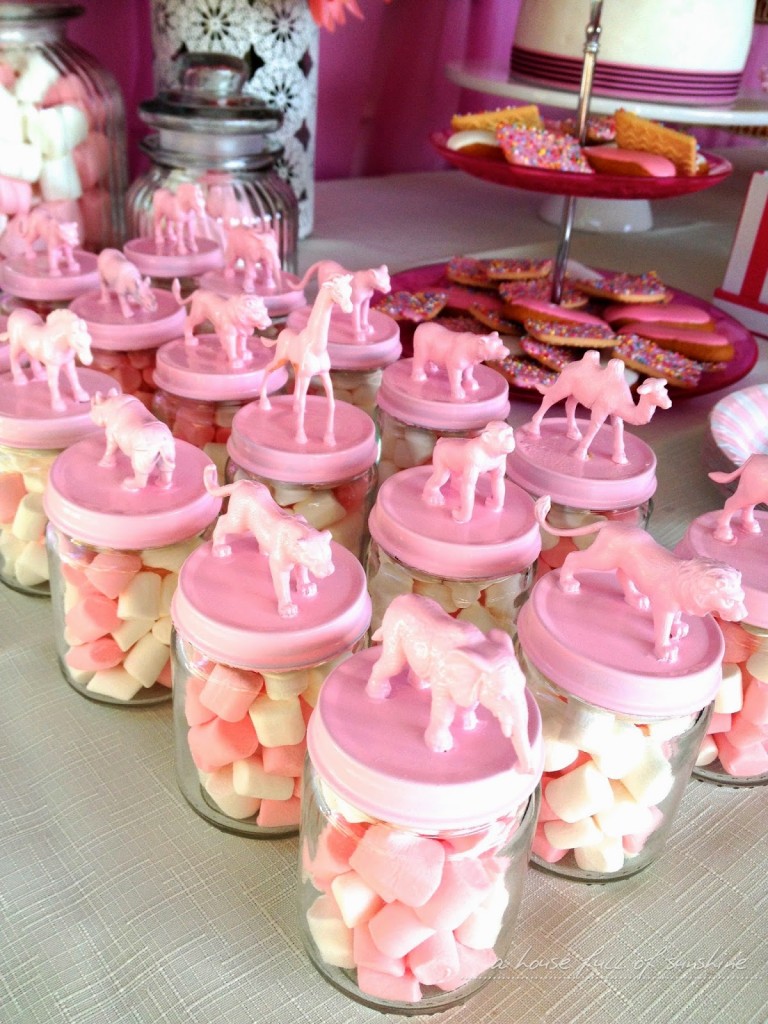 A vase of artificial flowers from Target prettified the table. 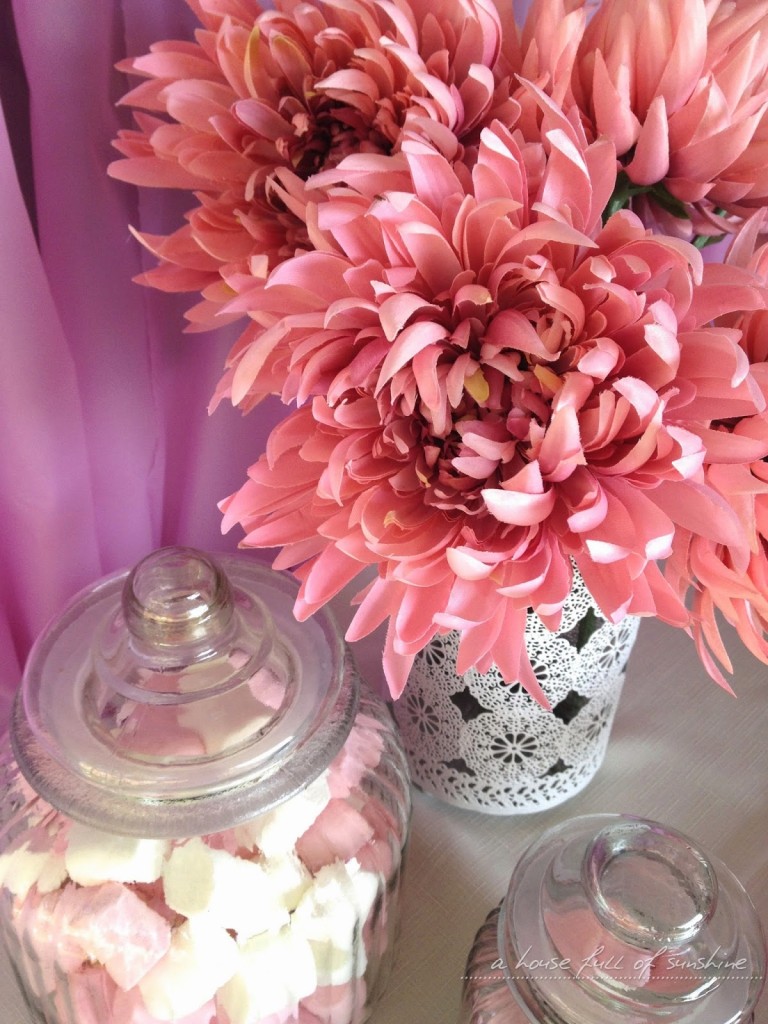 We had iced cupcakes with circus animal toppers. 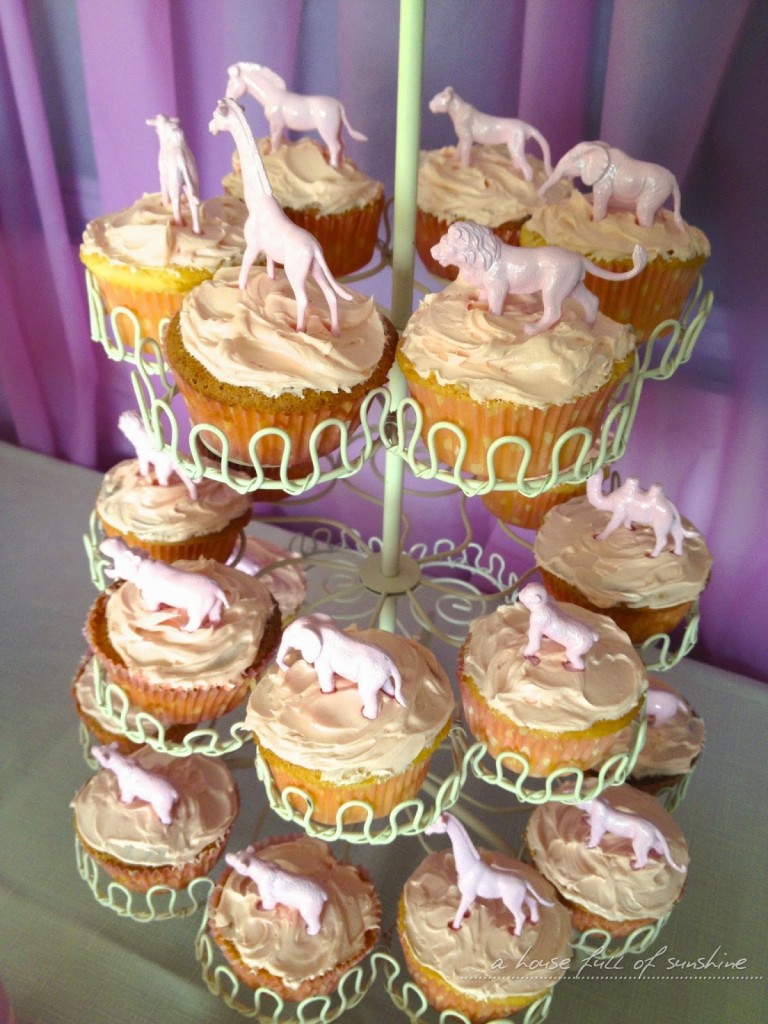 The toppers were just plastic animals, spray painted. Um, I was going to be super-good and impale each animal on a wooden skewer so the toppers did not touch the icing, but as you can see, I kinda ran out of time to make that happen. I watched my guests closely for any signs of toxic poisoning, but apart from two people passing out momentarily, everything seemed fine.
(Kidding…. kidding. Only one person passed out.) 😉 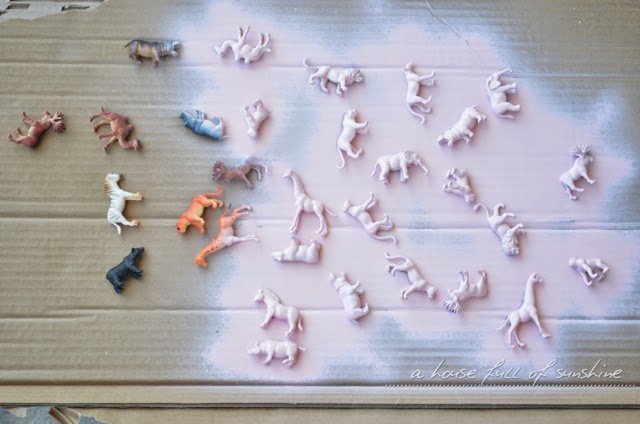 The pink Oreo pops were a big hit. I had a stash of them in the kitchen so I could keep refilling the box when it ran out. 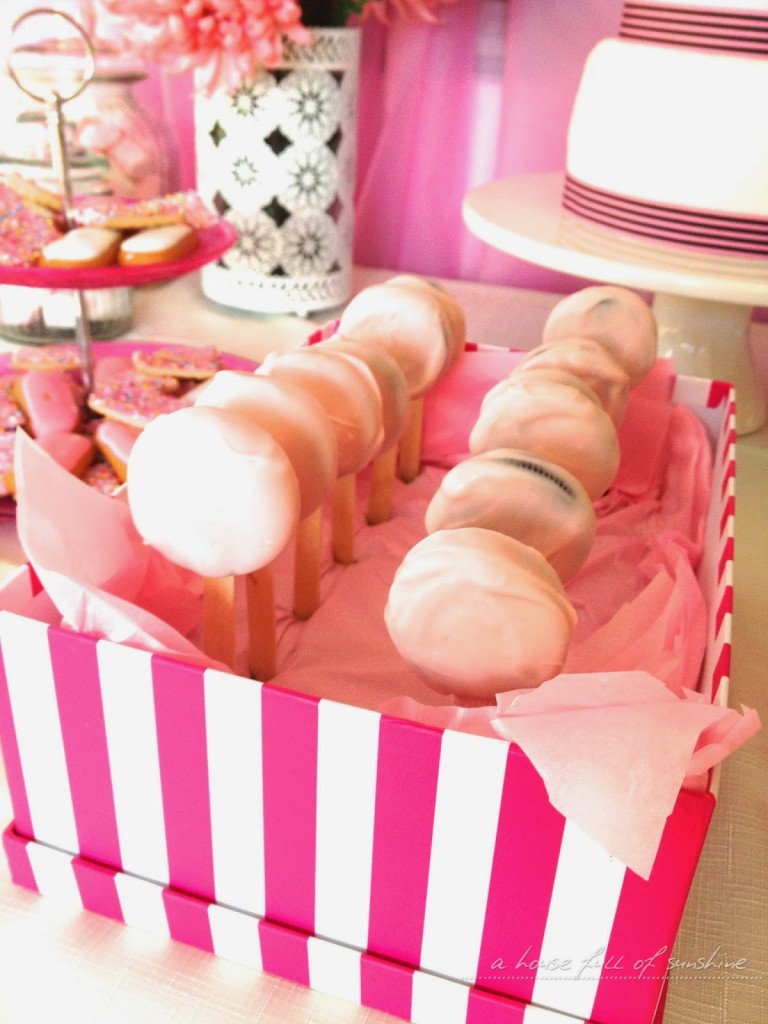 They were pretty simple to make in theory, although of course a bit fiddly in practice. Wanna know how to make an Oreo Pop? Here’s what you need: 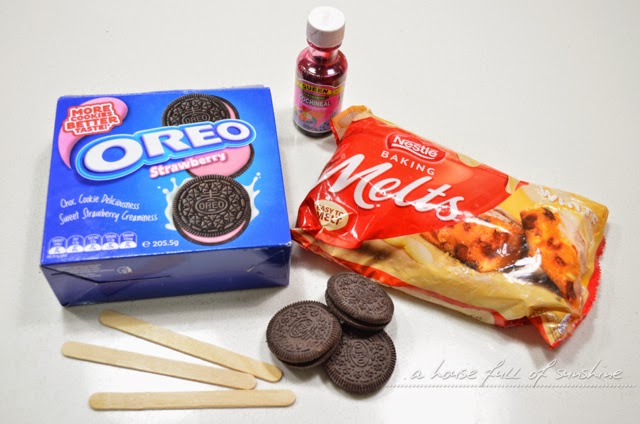 First you need to smush the craft stick into the filling part of your Oreo, and press the cookie back together. It’s tricky to do this without breaking the Oreo. I may have broken a few. There’s a rule that any broken Oreos must be consumed immediately by the cook, so it was really devastating when they kept breaking willy-nilly like that. But we got there eventually.

Next I melted white chocolate in a bowl over a saucepan of water on the stove, and stirred through a few drops of pink food colouring. I learned that the easiest technique to get a reasonably smooth finish was to hold the oreo pop upside down over the bowl and ladle melted chocolate over it.

Turns out however that it’s not a great idea to do this when the chocolate is steaming hot straight from the stove, because the filling in your Oreo will melt and your poor little Oreo pop will come apart and fall directly into your molten chocolate. Of course, kitchen rules dictate that said pieces must then be fished out with a spoon and consumed, together with all the melted chocolate that gets dredged up with them.

Not everyone would go to these lengths, but I am a very rule-abiding gal.

There are no photos of this process, because it involved fingers covered with chocolate and lots of rushing to finish the pops before the chocolate set too hard. I did re-melt it once, and that worked well. 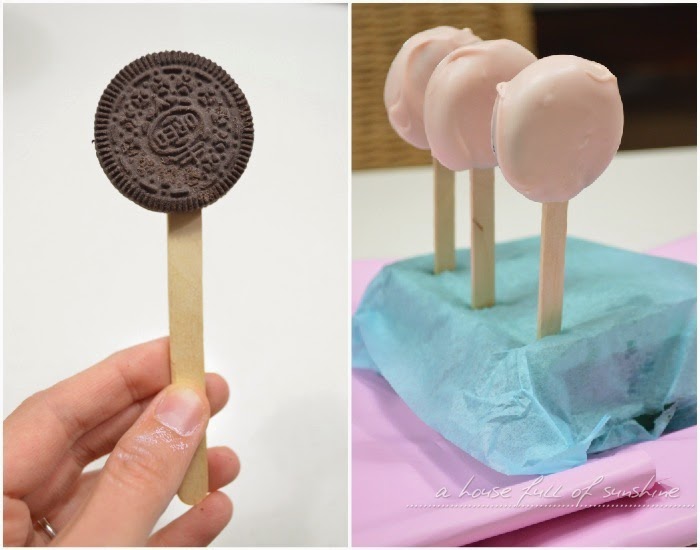 Once your Oreo pops are chocolate-coated, you need to keep them upright to set. I stuck mine into a florist oasis with a bit of tissue paper over top to catch any drips. Done!

If you’re more organised than me and actually get all your food prep finished before the day of the actual party (pffft – who does that?!), you could also melt some white chocolate and do fancy things over top like drizzle patterns or dip half of the Oreo pop into the white. Clearly, I am not that organised. 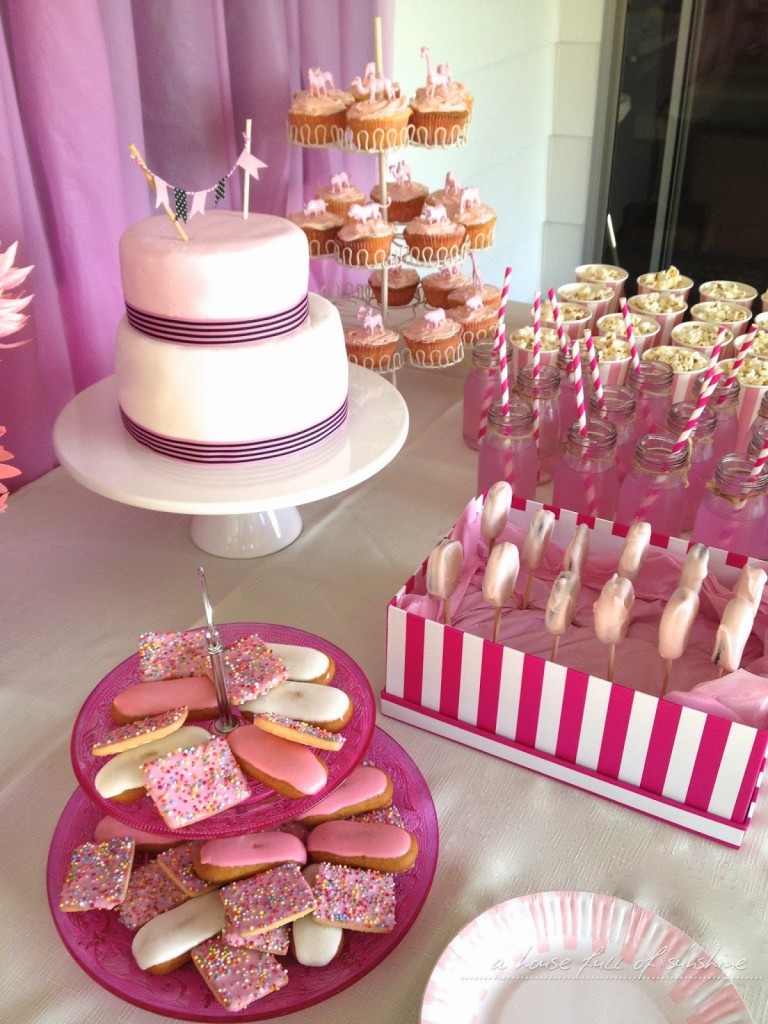 For our party entertainment, we set up a jumping castle. We have our own mini-version purchased on sale at Target a couple of years back for about the same amount it would have cost us to hire a jumping castle a couple of times. It makes an appearance at every party and often at other times as well; the kids love it!

Because it was a 2-year-old’s party, I didn’t bother planning heaps of games. But one thing Allegra does love is the Pick-a-Duck that seems to be present at any carnival or fair type occasion. I mean, it’s a complete con, or course. You’re basically paying $5 per child for the privilege of taking home some plastic junk that probably cost about 50 cents. But what can I say – the kids just love fishing those ducks out of the water. They are enthralled by it. They love spending their parents’ hard-earned cash for the 5 second thrill of catching a plastic duck with a hook.

So of course, the Pick-a-Duck game had to make an appearance at Allegra’s party. It was pretty easy to make our own DIY version, although I have to pre-warn you, the ducks we used did not exactly stay upright in the water. They capsized and lolled around on their sides looking exactly like a bunch of lame ducks. With hooks in their backs. The kids thought it was fantastic – they got to look at the numbers on the bottom and choose exactly which prize they wanted to win. Crafty little things.

Yep, that’s it. Make a smallish hole (I used a scrapbooking awl), then screw in your hook. Done! The fishing rod is just a hook screwed into the end of a piece of dowel. Oh, and you’ll need to number the ducks underneath so the little Duck Hunters can claim their prize.
For the prize board, I painted some pink stripes on a piece of pegboard, to carry through our circus/ carnival type theme. 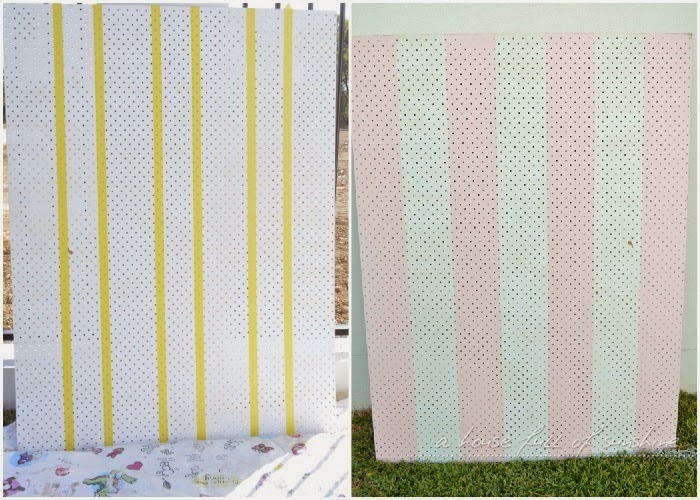 We had an awesome assortment of prizes for the kids, which we put into plastic ziplock bags, numbered, and hung with pegboard hooks. (I forgot to snap a photo until the prizes were half gone, but you get the idea.) The prize board sat on a low play table, behind an underbed storage tub filled with water. 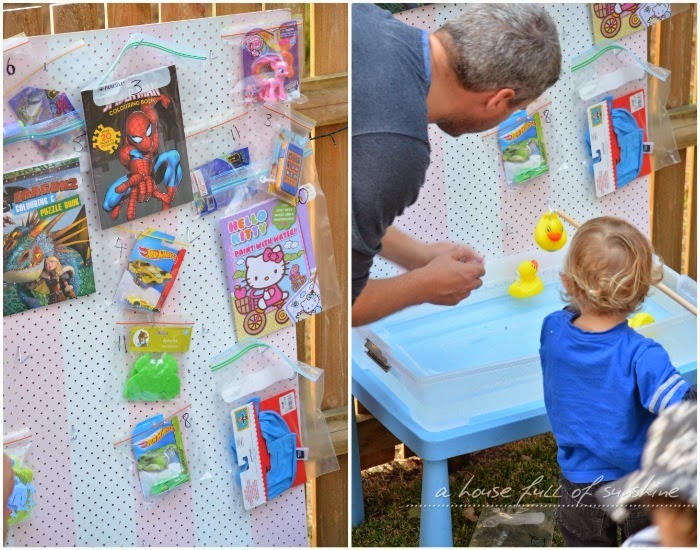 The kids absolutely LOVED this game! It was simple enough for even the littlest kids to have a go, with a bit of help.

Here’s our birthday girl, concentrating intently on the task. 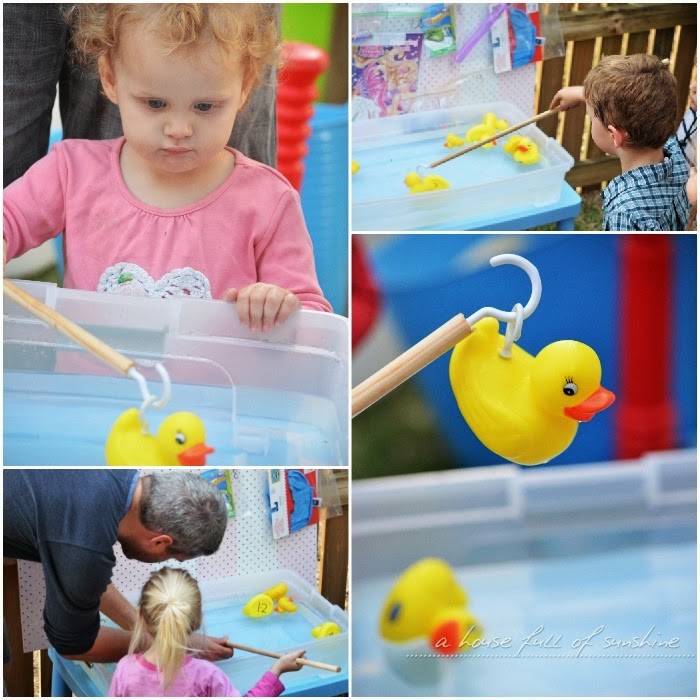 The older kids loved it too! We made sure we had a range of prizes for the different age groups, and there were at least two different prizes available for each number, so they could pick and choose a bit to find something they liked. 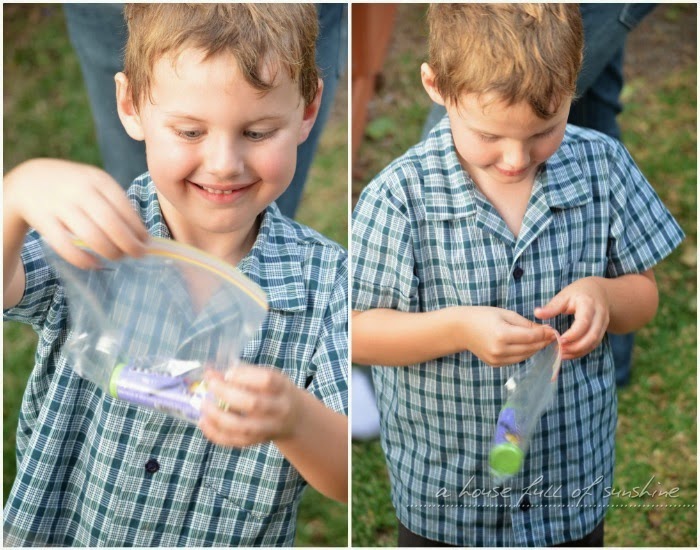 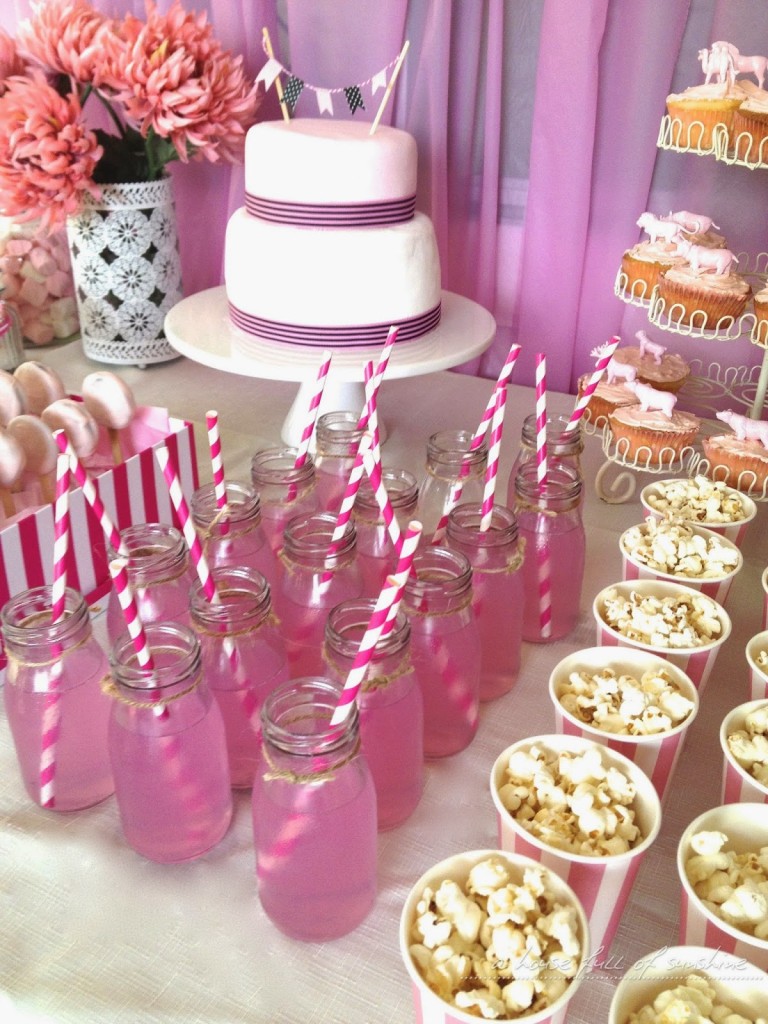 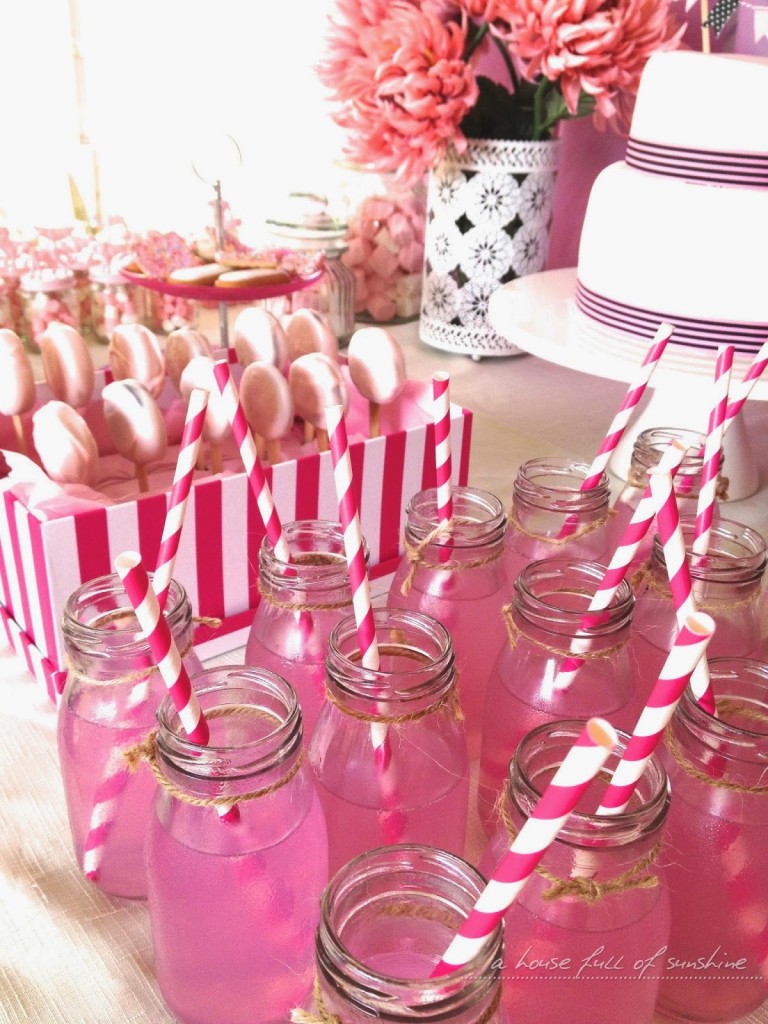 Thanks for reading! I hope the pink receptors in your retinas have not burned out completely.
I have a boy birthday coming up next, so I would assure you that this is a one-off, except that my son’s current favourite colour is…. you guessed it… pink.

Tell me – what are some favourite themes you’ve used for your kids’ birthday parties?
If you liked this post, you might want to check out these related ideas!
Linking up here: Creativity Unleashed, Pinworthy Projects, I’m Lovin’ It, The Party Bunch, Jennifer Rizzo
Pin41K
Share25
Tweet4
41K Shares