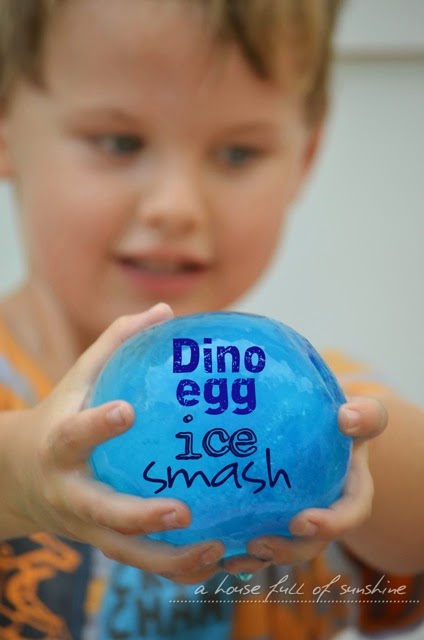 We’ve been a little bit dinosaur-obsessed around here lately. So, we decided to make some dinosaur eggs. And then smash them. Because… we have boys. No other explanation required.

First we filled some balloons (I just used regular balloons for this) with water tinted with food colouring. This actually wasn’t as simple as it sounds. My whole tip-the-coloured-water-from-a-jug-into-a-funnel approach did NOT work, because, um, turns out you actually need water pressure to expand the balloon. As in, a running tap. (Duh!! It’s clearly been too long since I was involved in any form of water fight!)

But that wasn’t the end of my enlightening discoveries for the day. I also learned that no, it is NOT a good idea to inflate the balloon first and then attempt to tip water into the balloon through a funnel.

Can you picture a brightly coloured water explosion?

Yeah. That happened. The boys were loving this activity already.

Can you believe I once earned an O.P.2 and was generally considered by kind-hearted folks to be not dim-witted? Pregnancy should come with a warning label. BRAIN CELLS WILL DIE, PEOPLE. For reals.

Exhibit A: balloons. Filled. My third and final strategy involved dripping food colouring awkwardly into the neck of the balloon, filling from the tap to wash the colour down, and then giving the balloons a bit of a shake. It worked, even though I got food colouring all over my fingers and looked like I’d beaten a rainbow to death. Also, it was impossible to tell how bright I’d made the colours. I just had to guess. 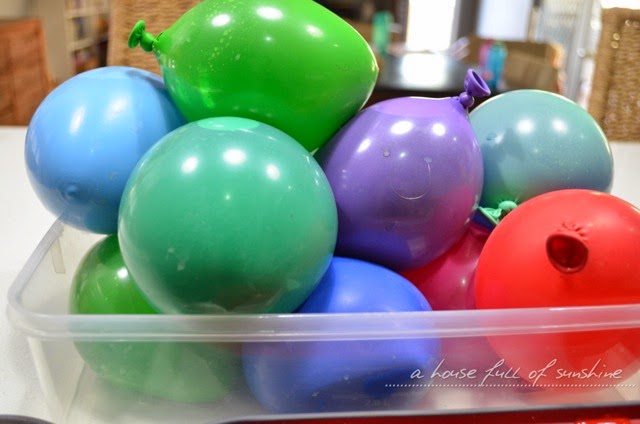 I also filled a couple of muffin pans with some coloured water for a bit of shape contrast. 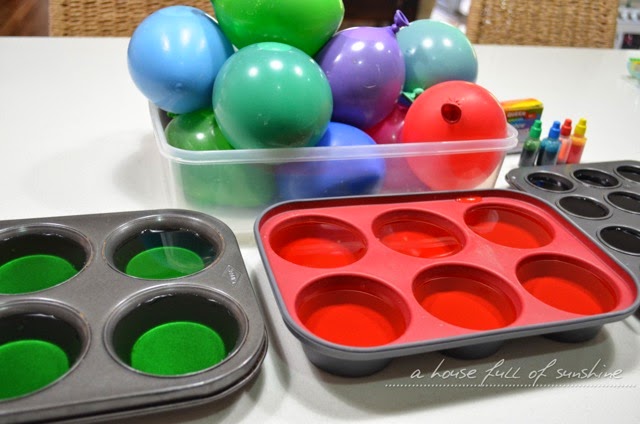 Into the freezer with these bad boys. It took a good 48 hours for the balloons to freeze through to the middle.

Here’s one I prepared earlier… 😉 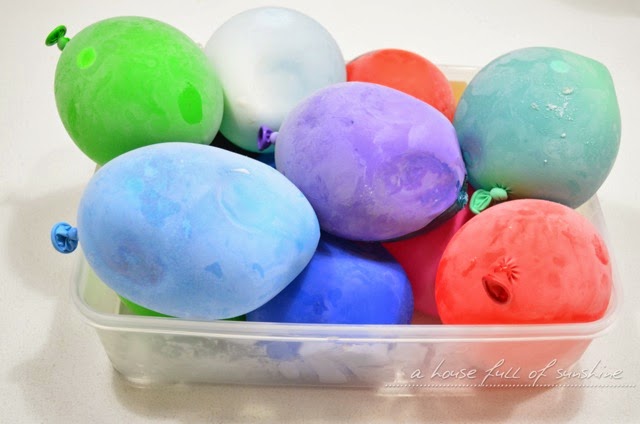 Then it was a matter of painstakingly cutting and peeling the balloon skins away from the ice with numb, frozen fingers while being nagged by over-eager children every 2 seconds.

…. Annoying? Just trying to create atmosphere. (It was annoying.)

I’m really selling this activity to you so far, aren’t I?

Don’t worry, it gets better. Pretty much instantaneously from here. Because this is when you get to tip your beautiful icy dinosaur eggs into a tub and sit down with a cup of coffee or glass of wine while your kids amuse themselves happily for the next hour. 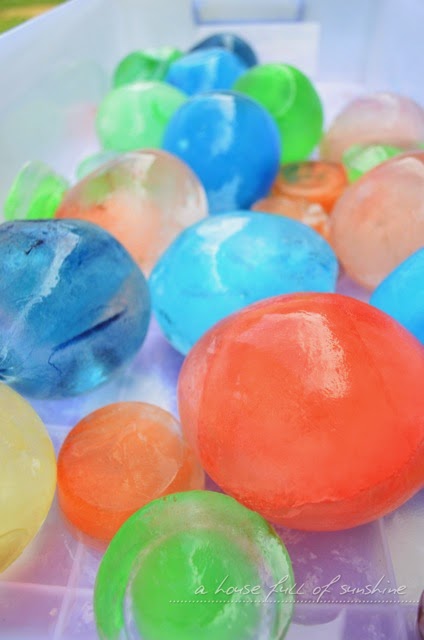 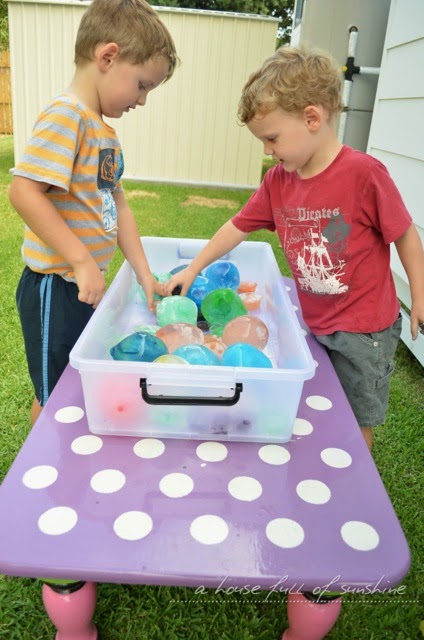 The boys were fascinated by the smooth, glassy, slippery texture of the ice “eggs”. 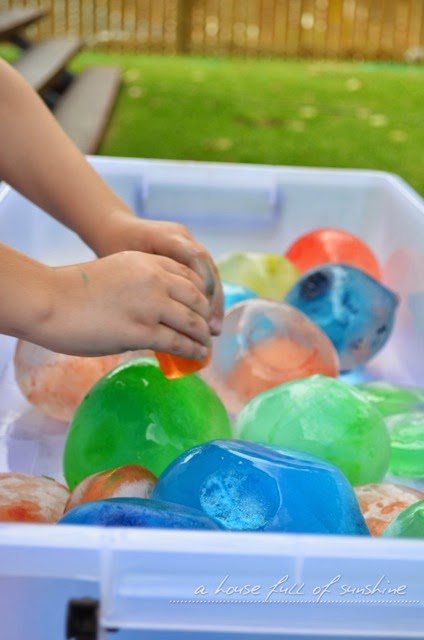 The colours gradually grew more intense as the white bloom of frost melted away from the surface. 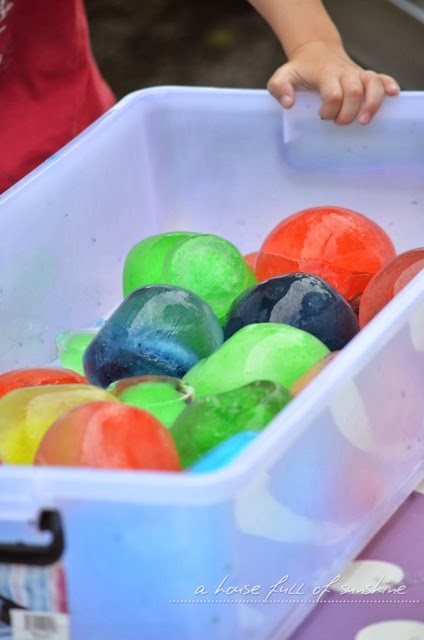 I would declare authoritatively that naming these balls of ice “dinosaur eggs” really increased the kids’ level of engagement, except I have no idea what their level of engagement would have been otherwise. But hey, they dug it. And us parents all know there IS something in a name.

(Think Lola, who hates peas but will happily eat green drops from Greenland…) 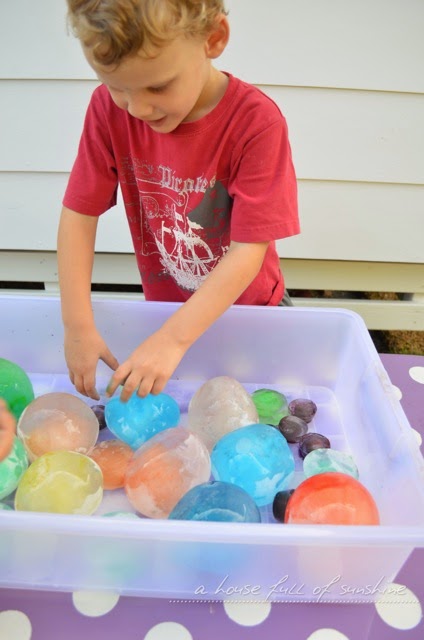 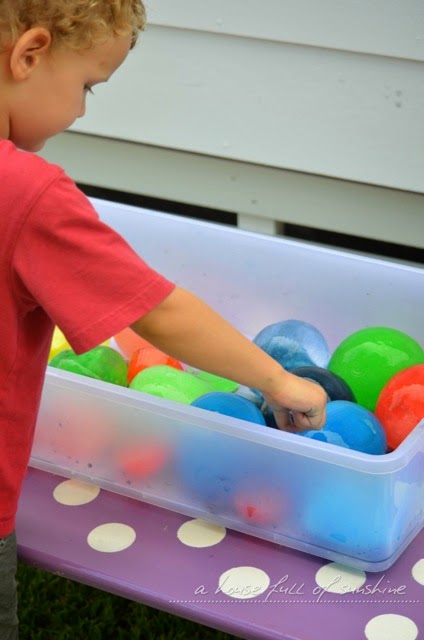 So… dino eggs it was. 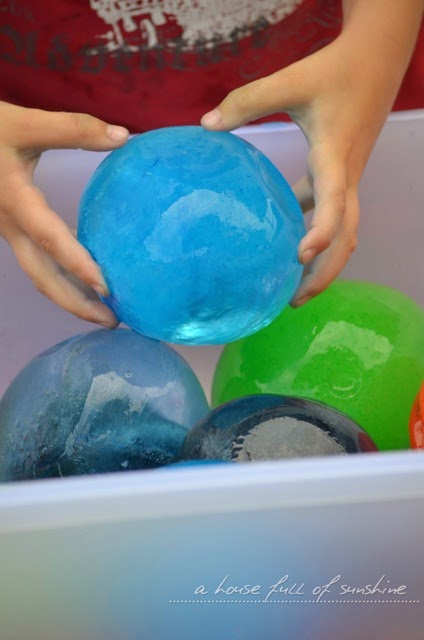 Allegra wandered in and out of the activity. Those dino eggs were a bit cold for her liking! 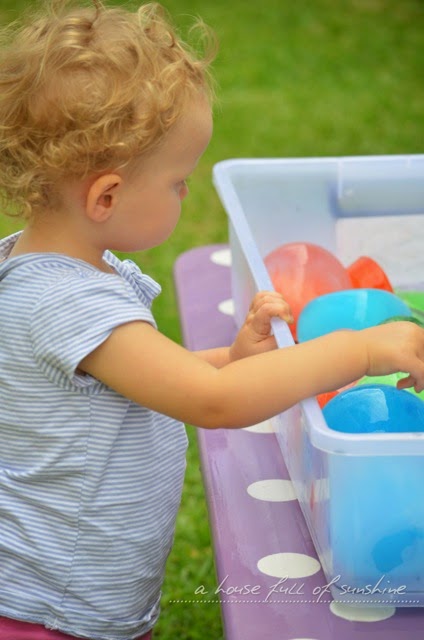 Although she enjoyed playing in the coloured water as the ice started to melt. 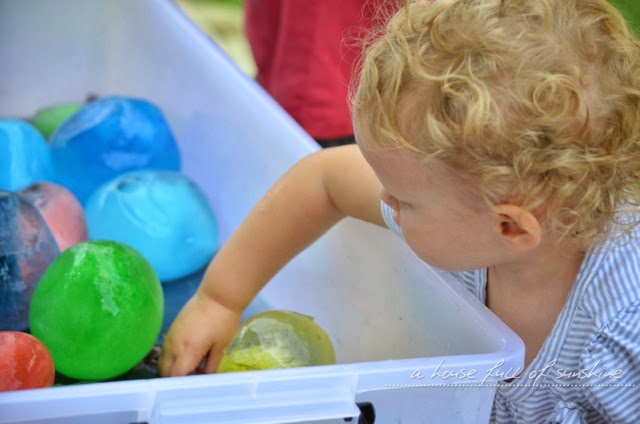 The sensory play soon evolved into a spontaneous game invented by the boys. I couldn’t quite figure out the rules, but it involved throwing the eggs onto the grass one by one, then running screaming around the yard to collect them again. 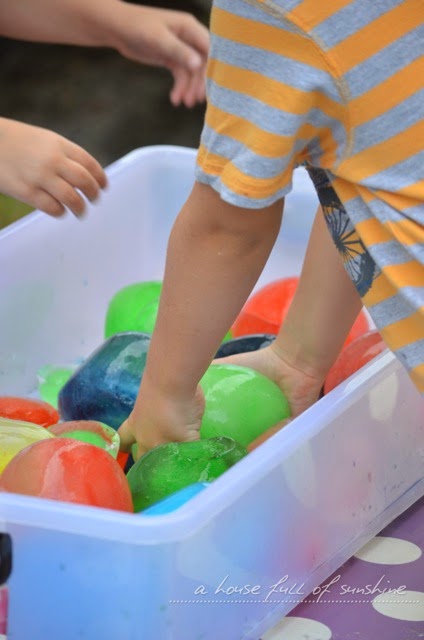 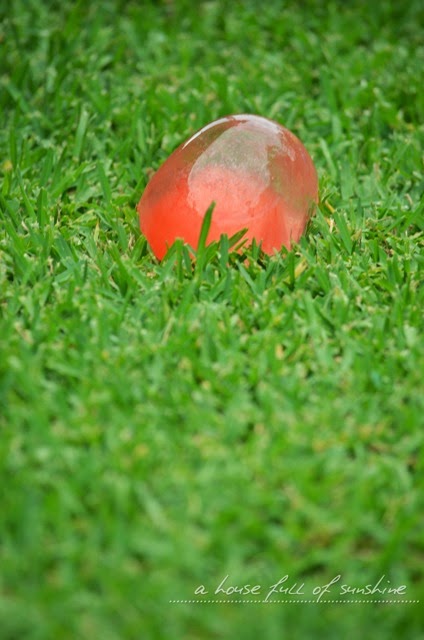 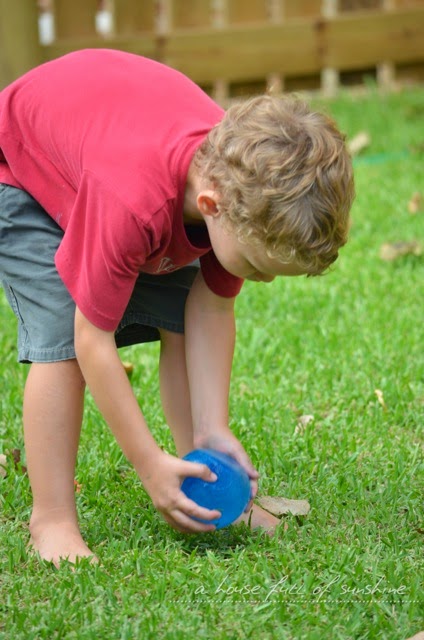 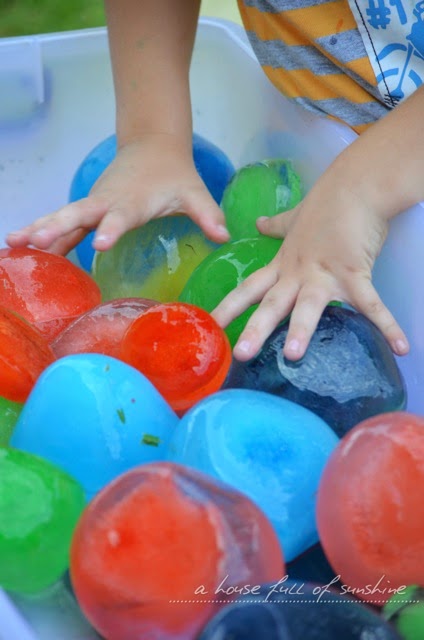 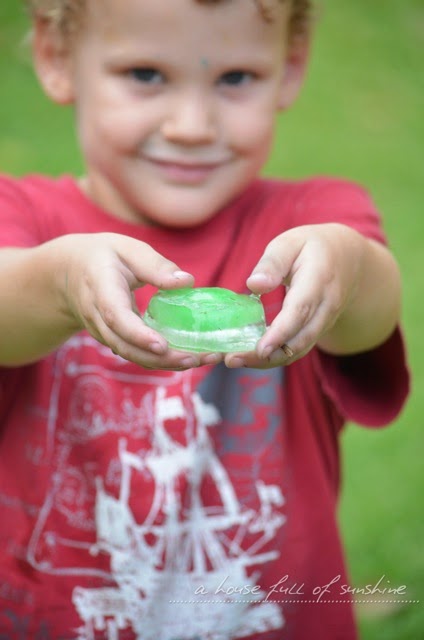 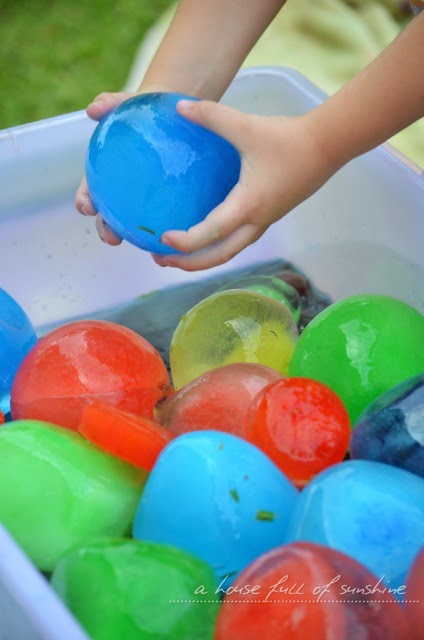 After about an hour, it was time for the pinnacle of the activity – an ice smash! I let the boys loose to hurl their dino eggs at the fence and shatter them into hundreds of satisfying pieces! 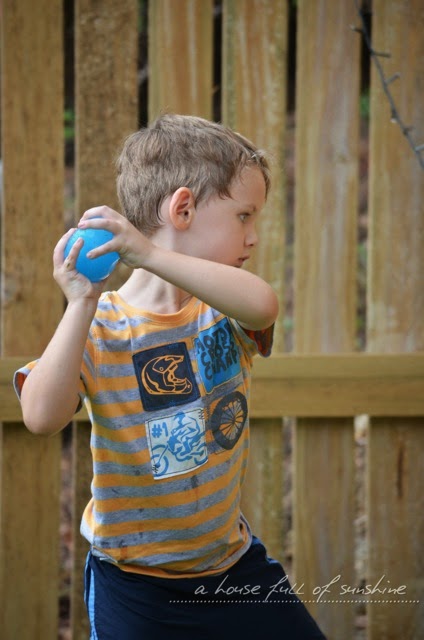 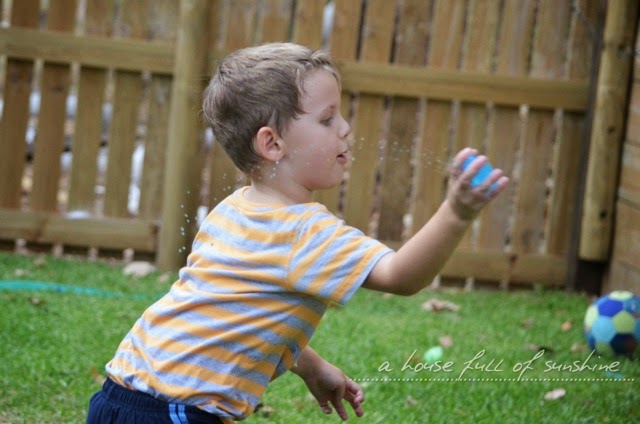 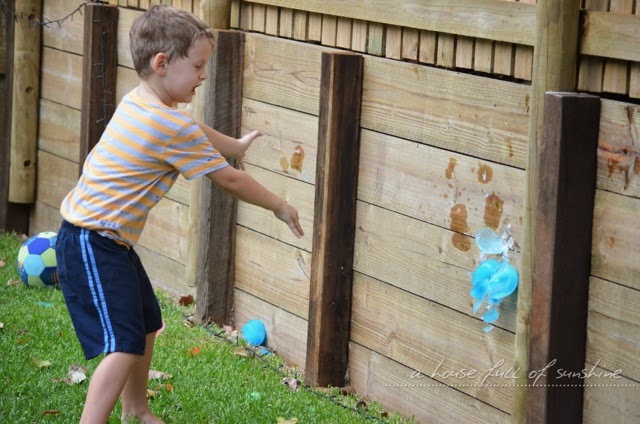 The boys absolutely LOVED having the freedom to be wildly destructive! Who woulda thought? 😉 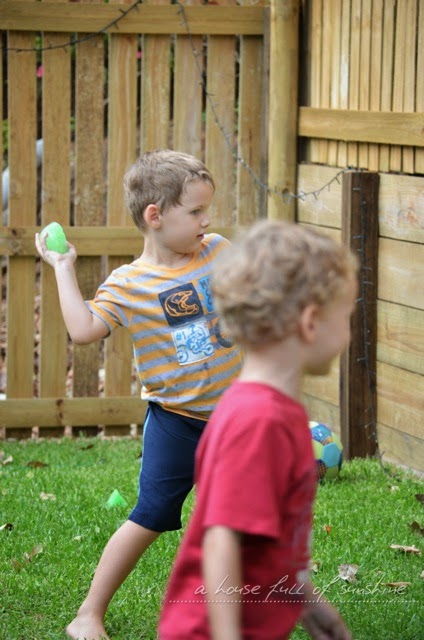 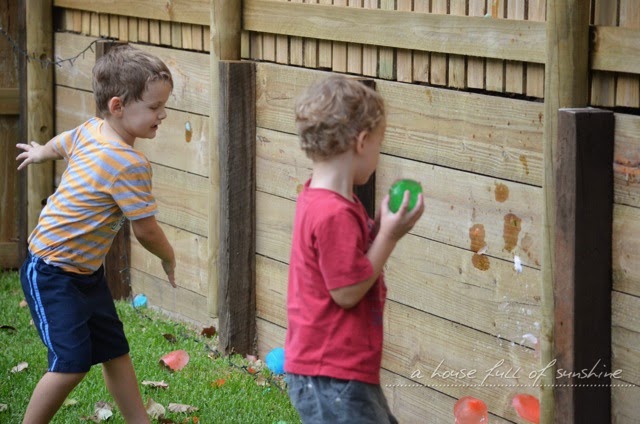 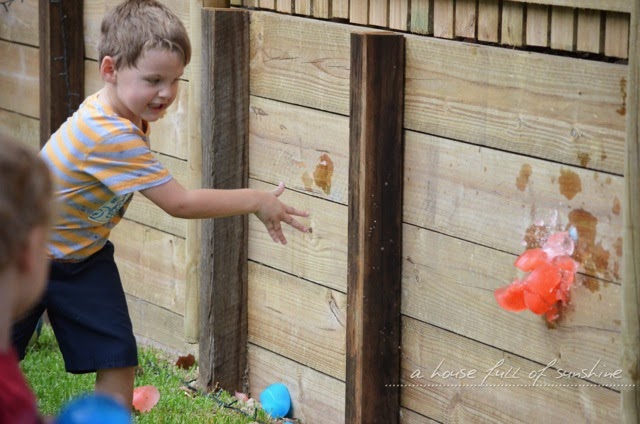 Think two boys proclaiming at the top of their lungs that this was the BEST day EVER!

Hearing them say that absolutely made my heart smile! Isn’t it amazing how such a simple activity can leave such an impression?

They continued to talk about “THE BEST DAY EVER” for days, even weeks afterward. The whole activity, and particularly the ice smash, was an incredibly big hit!

So yes, it was worth turning my fingers red, purple and green, and then freezing them off altogether.

Dinosaur eggs, on the other hand, rock.