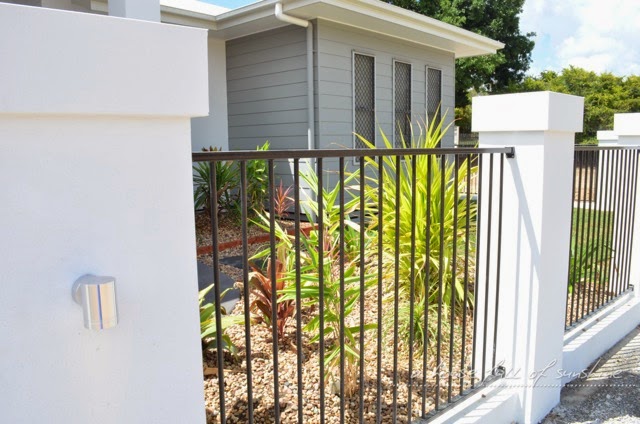 (Title to be sung to the tune of the Snooze jingle… got that stuck in your head now? You’re welcome.)
Last time I showed you a picture of the outside of our new house, it looked like this (below): 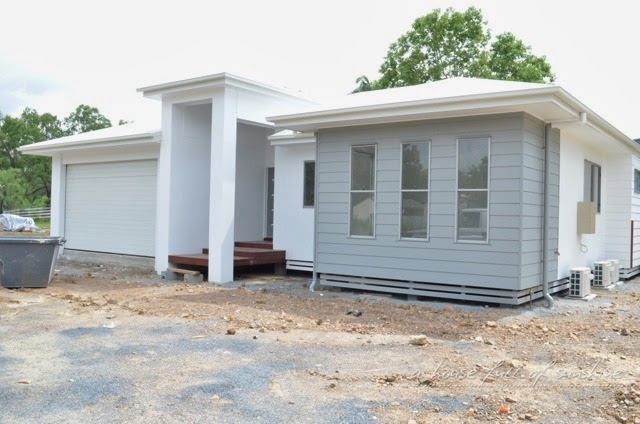 If I had a drum, I’d be attempting a drumroll. Cos now, after three months of living with a dirt yard…. our house looks like this. 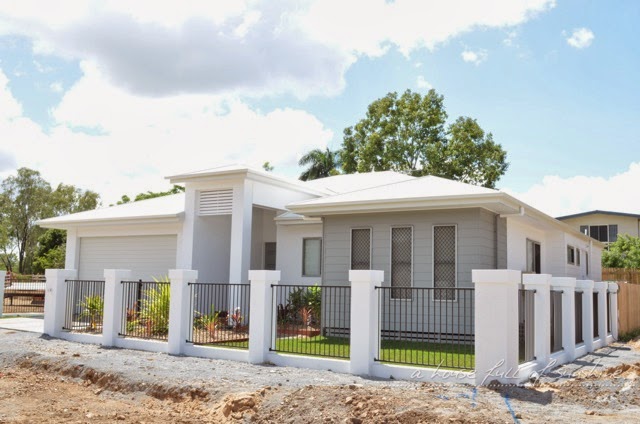 Can you feel my excitement? Three months is a long time, people. A long time for children and assorted menfolk to track dirt continuously inside the house. A long time to live without the colour green, which makes everything feel so much more fresh and happy. 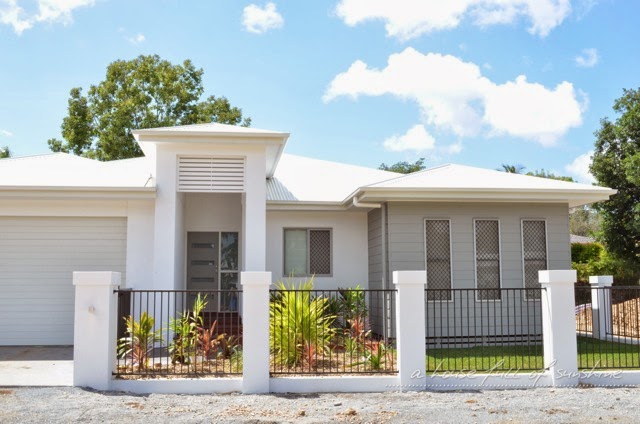 The absolute star of this show, without a doubt, is that seriously good-looking front fence. Hellooo, handsome.
We have never had a fence this good looking in our entire house-loving lives. 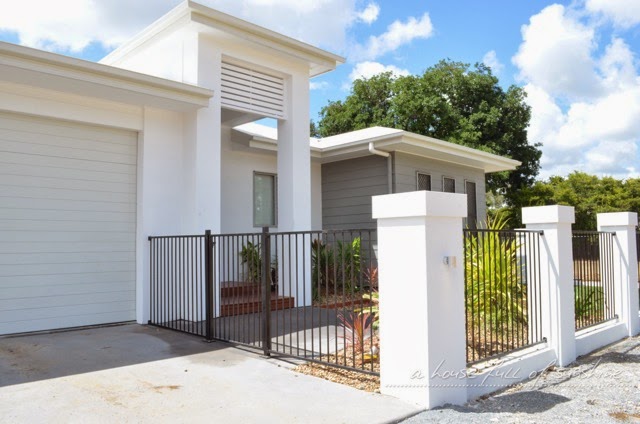 There is a reason for that. An $18,000 reason.
And that’s just for this front bit. The back we did in cheap timber.
Despite the fact that we won’t be able to afford to feed our children for the remainder of the year, I do not begrudge the price tag.
Digging the footings and laying all that fancy block-work was only the start. It took the renderer a solid week to render the fence. It looked incredibly painstaking. And then there was the horde of other tradies who came to do their respective bits – painting, installing the fence panel inserts, adding lights. 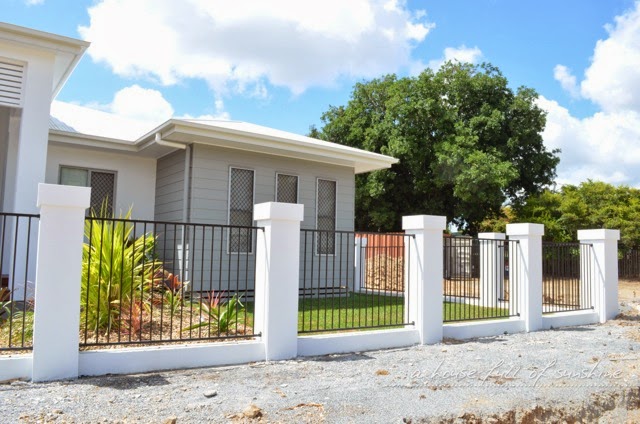 All of that activity made me a bit nervous. See, we didn’t have an actual, fixed-price contract before we leapt in with this little fence project. You would think that after all the houses we’ve built, we’d know better, but no – turns out we’re somewhat slow learners.
So I stood there watching all these expensive tradies with their expensive tools and their very expensive drops of sweat and I could see the dollar signs adding up like a terrifying vision in the sky.
And then it was finished, and it looked wonderful.
And then we got the bill, and I had what is medically known as a cardiac incident.
I’ve actually considered selling the eldest child into slavery to pay for the fence. Don’t judge me. You must admit it’s a very good-looking fence. 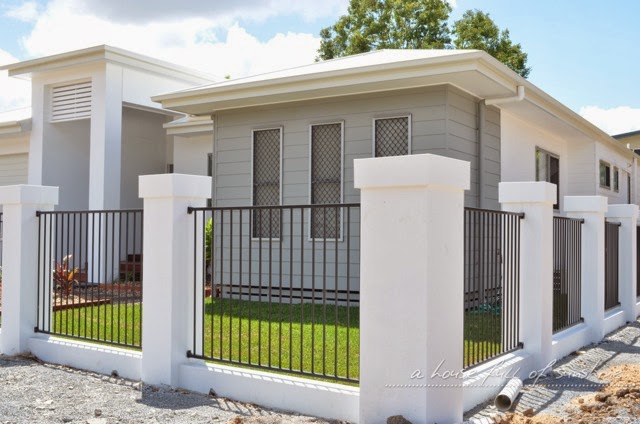 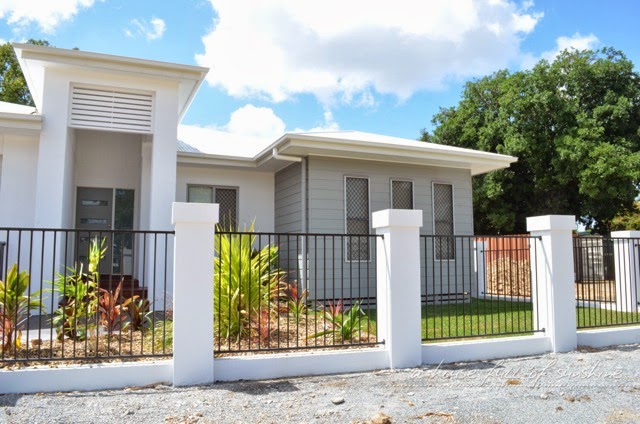 Now, I’m no gardener. We had a bit of money for landscaping in our building budget. Essentially, the builder said, “You have $300 for plants. Go to the nursery and pick some out.” So I went and picked some, and they added up to $450. Eh – story of my life. Champagne taste on a beer budget.
At this point, my husband was still in a coma from the shock of the fence bill (which incidentally was his idea, otherwise I’d be blogging about single motherhood right now), so I figure, pfft, what’s a measly $150? We’re already selling a kid into slavery, we can throw in his bike and DVD collection as well.
Here was my strategy for picking plants. I strode in there and said with confidence, “I’d like a large pandanus tree, four tiger grasses, and assorted ti plants please.”
Actually, that didn’t happen. It went more like this: “Um – I like that big spiky thing over there. What’s that called? Oh, and I’ll take some of those grassy thinga-me-bobs. And a couple of those red things. And those green ones? Oh, they’re all green, aren’t they. Let me show you which ones I mean…”
I was pure horticultural assurance and style.
I even made the poor guy drag them all out into a cluster so I could picture how they’d look in the garden bed. I was going for height contrast – tall in the middle, fanning out to short at the front – and colour contrast, with a splash of red mixed through with the green. I liked the mix of textures we ended up with as well. 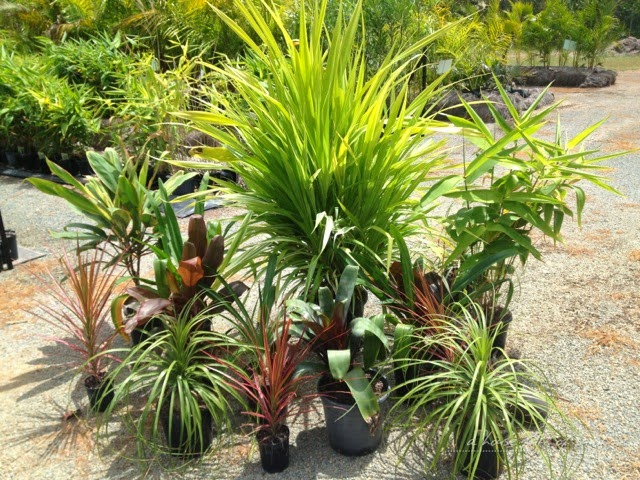 I took a picture on my phone so we could more-or-less replicate the idea at home in our two garden beds. 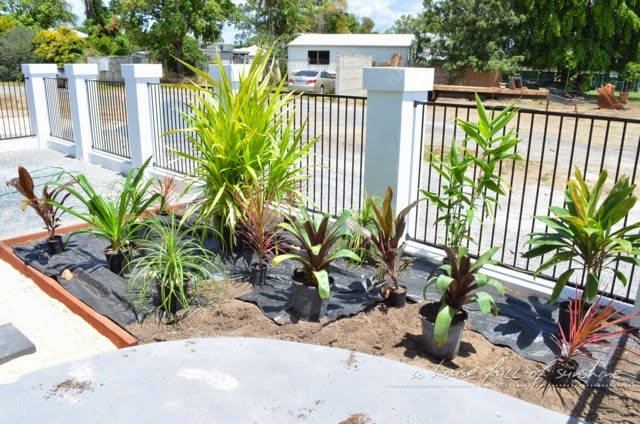 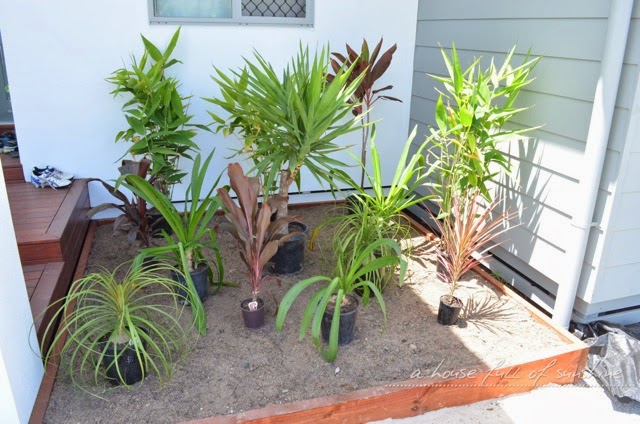 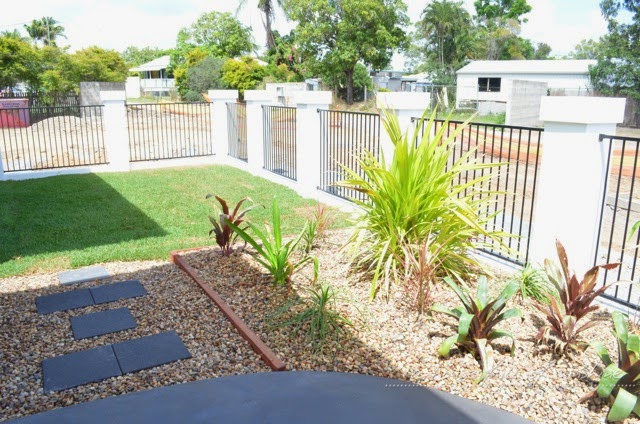 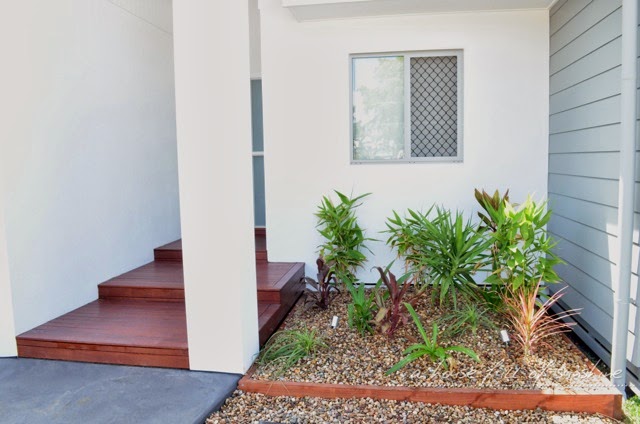 I would like you to take a moment to appreciate the loveliness that is our Pandanus tree (heretofore known as “that big spiky thing”). Isn’t she gorgeous? 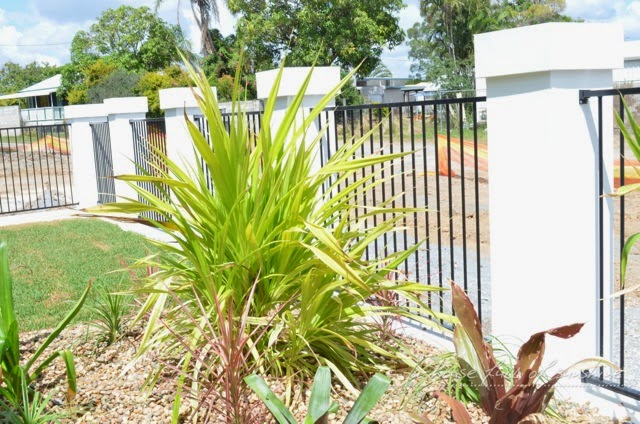 We also have a cool stepping-stone thing going on. 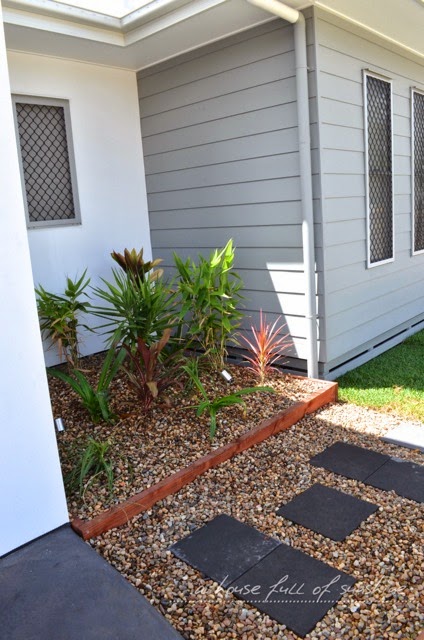 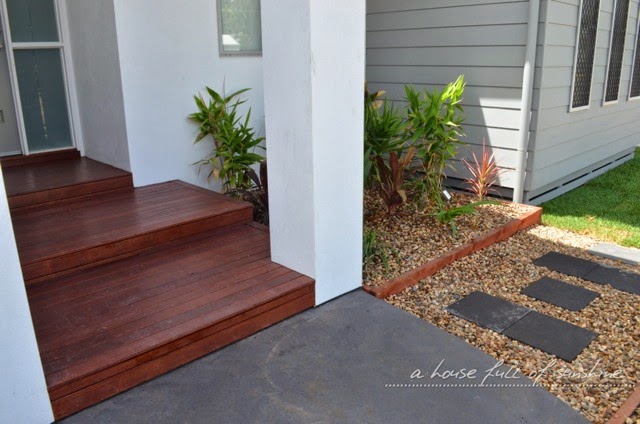 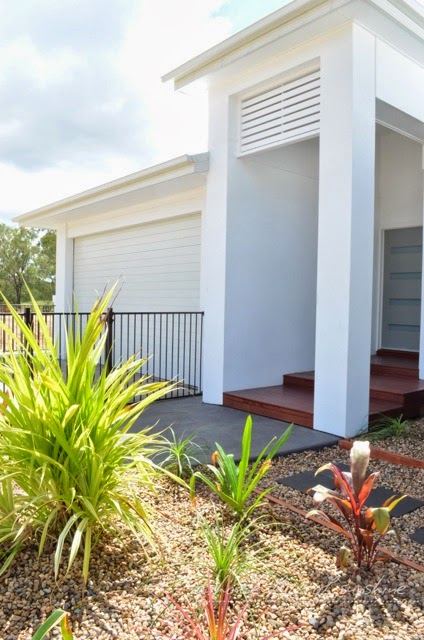 All in all, it’s feeling a lot more civilised and a lot less like a trailer park. 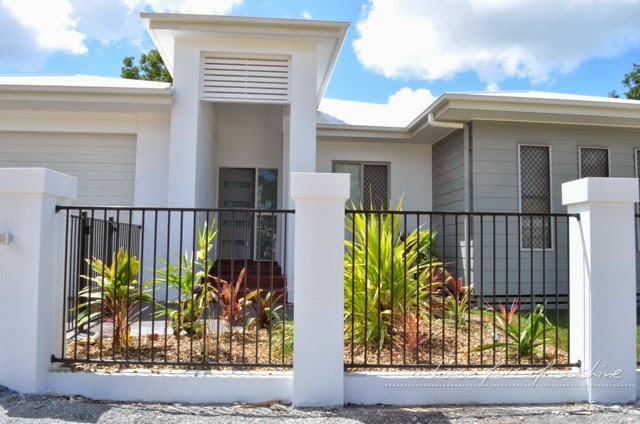 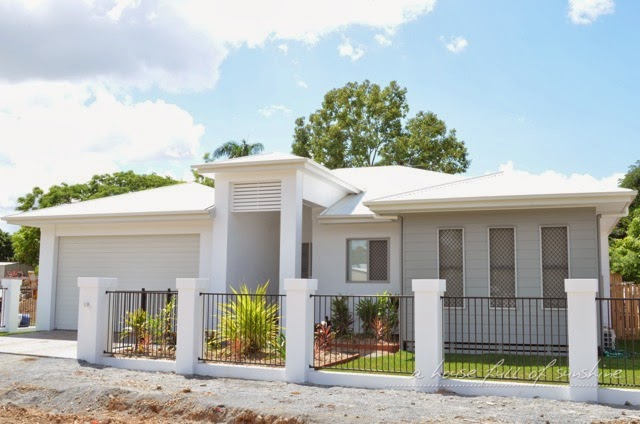 When you zoom out a little more, however, it’s a different story… 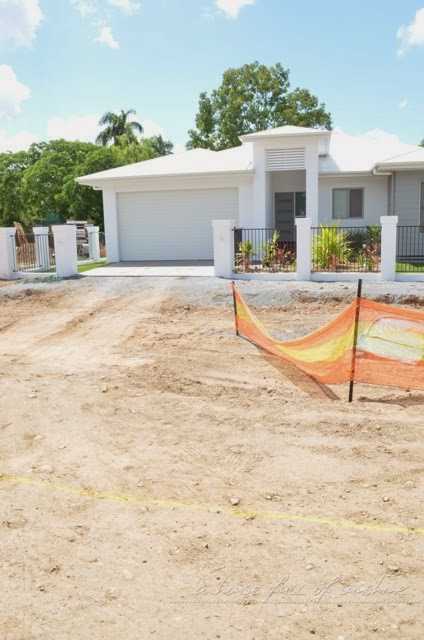 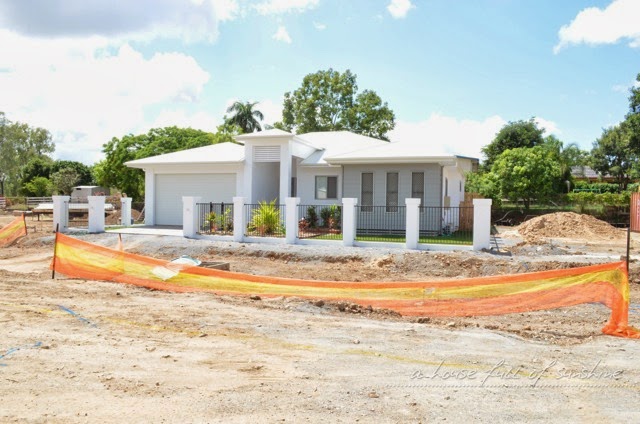 Yes, we are marooned in a wasteland of dirt. Dirt as far as the eye can see. 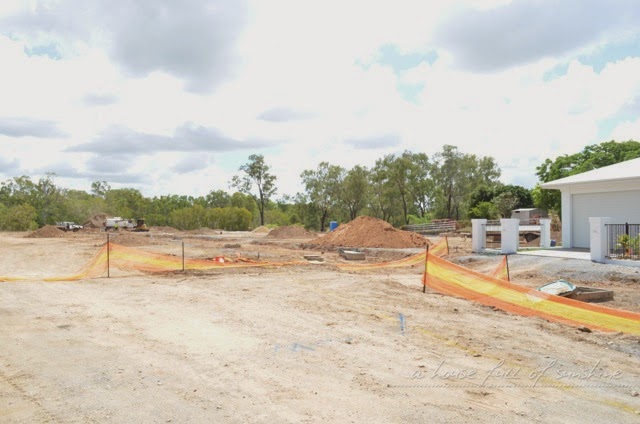 This expanse of dirt is our house block, which we’re currently subdividing into 13 individual lots. (What can I say… I’m married to a property developer.) We’ve never attempted a big project like this on our own before, independent of his company. It’s daunting and exciting and…. well… dirty.

Just beyond those trees in the picture above, the land drops down to a river. It’s a riverfront block. When it’s finished it will be absolutely beautiful. We have plans for a big community deck overlooking the river and a community veggie patch. The houses toward the back of the block will be double-storey to maximise the river views, but we will be on-selling before the development reaches that stage.

Meanwhile, we’re just happy that in the midst of our dirtscapade, we now have one little oasis of green, fenced off from the rest of the chaos. 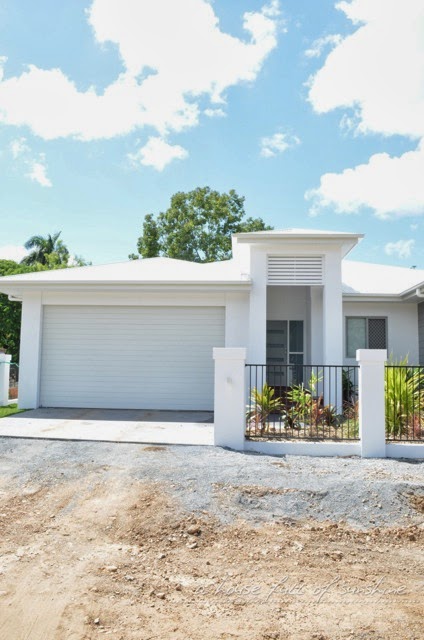 After all… it’s amazing what a little fence can do.

What do you think? Worth it for the street appeal? Waste of money? Anyone have any good tips for me on actually keeping this garden alive? (I did mention, didn’t I, that I’m not a gardener…)