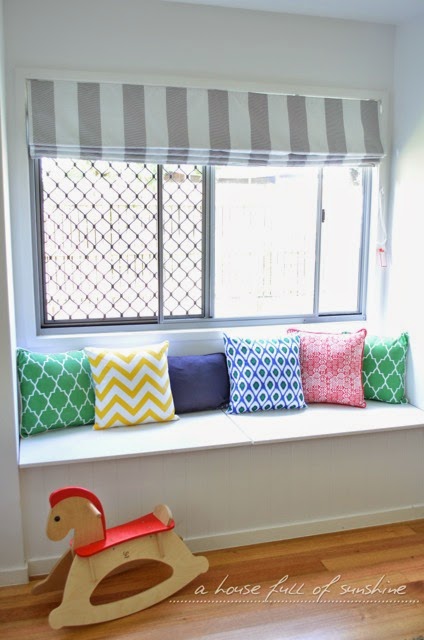 Since moving in to our new house a few months back, the playroom has seen some progress. It’s nowhere near finished yet, but it’s a darn sight better than it was: 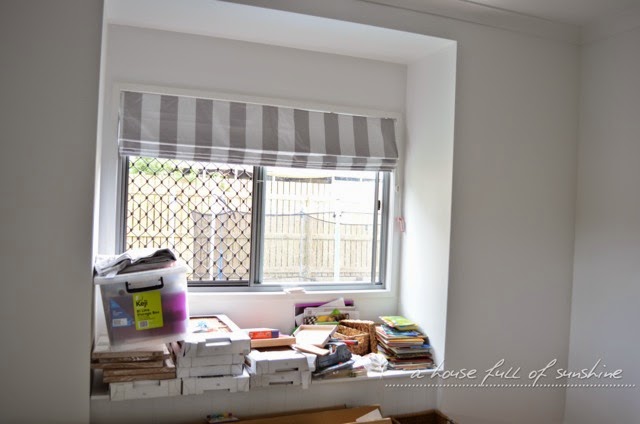 Here’s where we’re at right now: 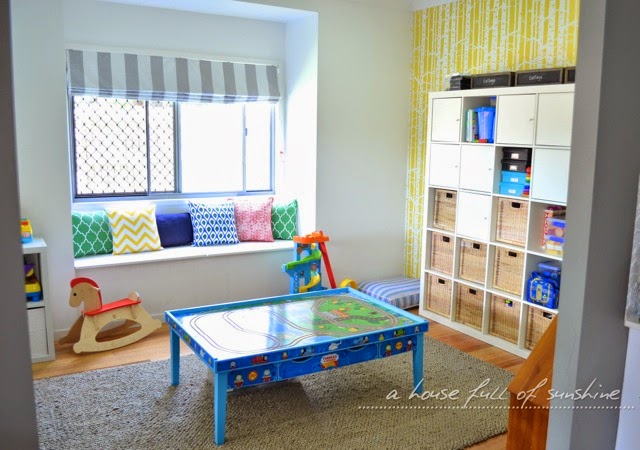 I’ve already shared the story behind the sunny yellow birch-forest feature wall, which (in case you’re new around here – hi there!) is not wallpaper, I painted it using a stencil. (You can read all about it here!)

I added Ikea Branäs baskets to hold toys, and installed cupboard fronts onto the unit to hide some of the clutter. I went for a random pattern with the cupboard fronts, based mostly on which bits I wanted to hide. I didn’t want a solid row of cupboards at the top, because I thought it would look too top-heavy, and I also didn’t want to alternate (one door, one open), because I had too much stuff to hide. It kinda turned out looking like a game of Tetris. The OCD in me is still really unconvinced about this look.

Unfortunately, the lazy girl in me is equally unconvinced about removing cupboard doors and re-installing them.

What do you think?? 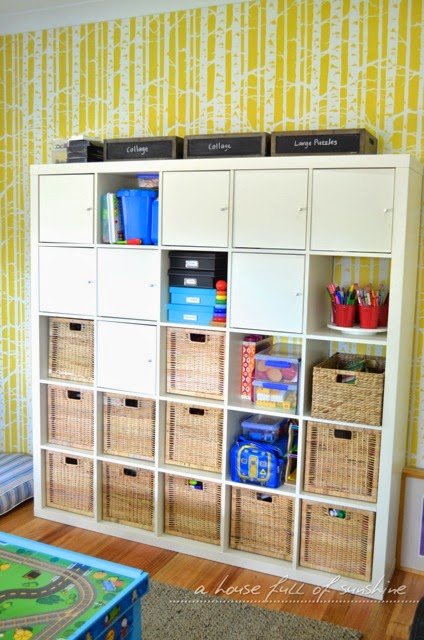 On top of the Ikea Expedit unit, I’ve added some chalkboard-fronted wooden trays (purchased at Pillow Talk) to store some of our frequently-accessed craft supplies, and puzzles that are too large to fit on the shelves. 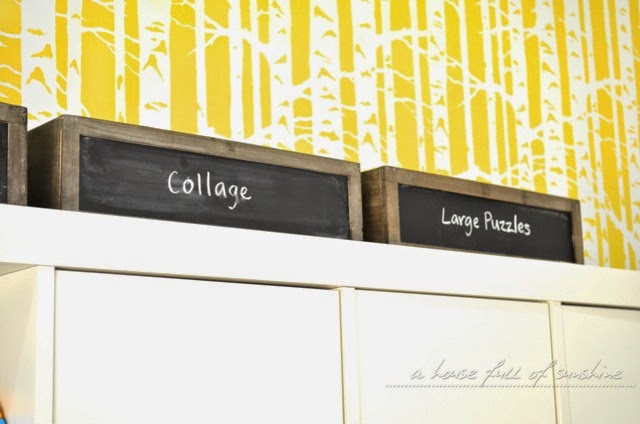 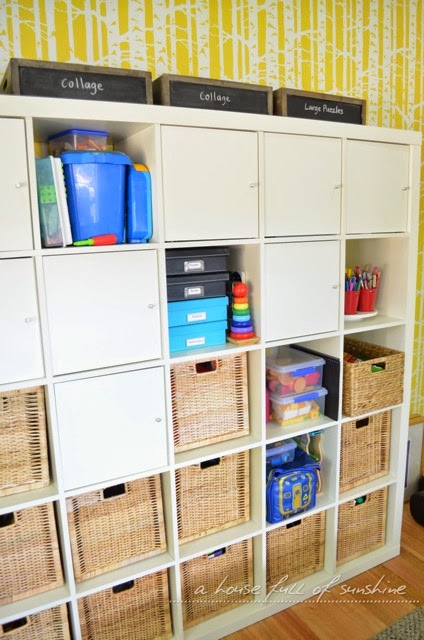 I like how the woven baskets compliments the natural texture of the sisal floor rug. Other than that, to be honest, I haven’t been thrilled with the ‘ole Branäs baskets. At almost $20 a pop, they quickly add up to be a bigger expense than the unit itself. Which would be okay if the quality matched the price-tag, but sadly, I haven’t found that to be so. The bottoms keep falling out quite suddenly and dramatically, dumping a basket-load of small toys all over the floor each time and causing small children to cry. (And perhaps Mummies too, on occasion.)

It’s an unfortunate design flaw. I’m thinking of reinforcing the bottoms with zip-ties, but it’s a shame to have to cobble them together already when we’ve only had them a few months. I’m also noticing a bit of wear-and-tear and catching of the fibers as the baskets are pulled in and out. Nothing major, but I’m wishing I read a few reviews before forking out the bucks. 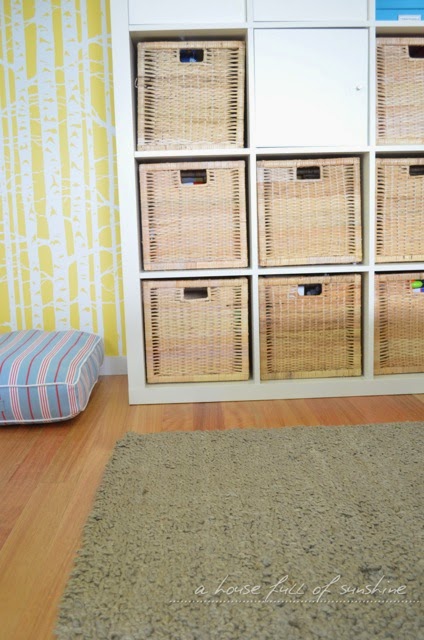 The cushions in the window seat are from One Duck Two. The yellow chevron cushion is a cheapie from Target. As you can see, I’m going for a yellow, navy, green and red colour scheme. I wanted it to look colourful and cheerful, as fitting for a playroom, but also not too kiddish, because this window seat is quite a visible feature from the dining room. 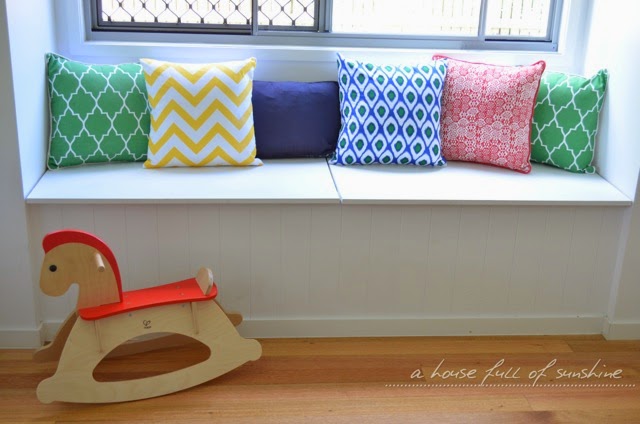 I’ve also added a floor cushion in the corner. This little space is going to become a reading nook for the kids. I shamelessly brainwash my children into loving books. So far it’s working out great. 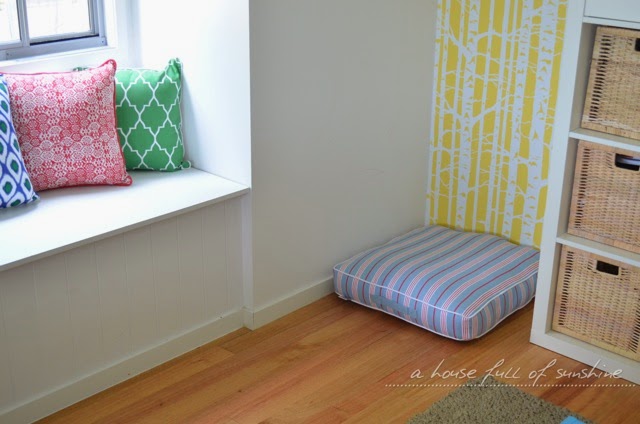 On the other side of the room is the kids’ little craft/ colouring table, and their play kitchen. Things are looking a little bare in this corner. Which brings me to my To-do list for this room. 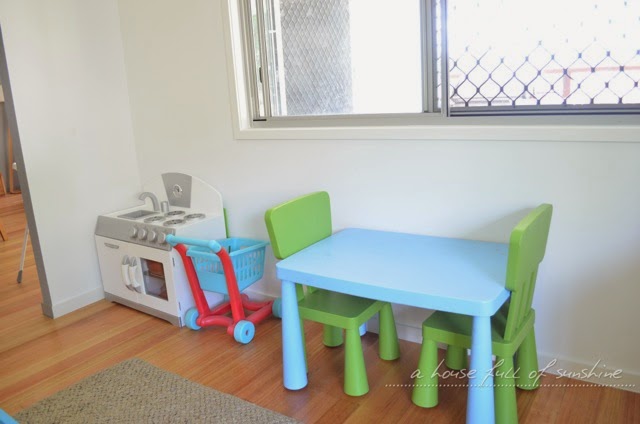 TO-DO for Playroom:
1. Install a cork pinboard-gallery for kids artworks
2. Paint a chalkboard feature wall
3. Paint some frames for A4-sized artworks and install them as a gallery wall
4. Add shelves to the reading nook 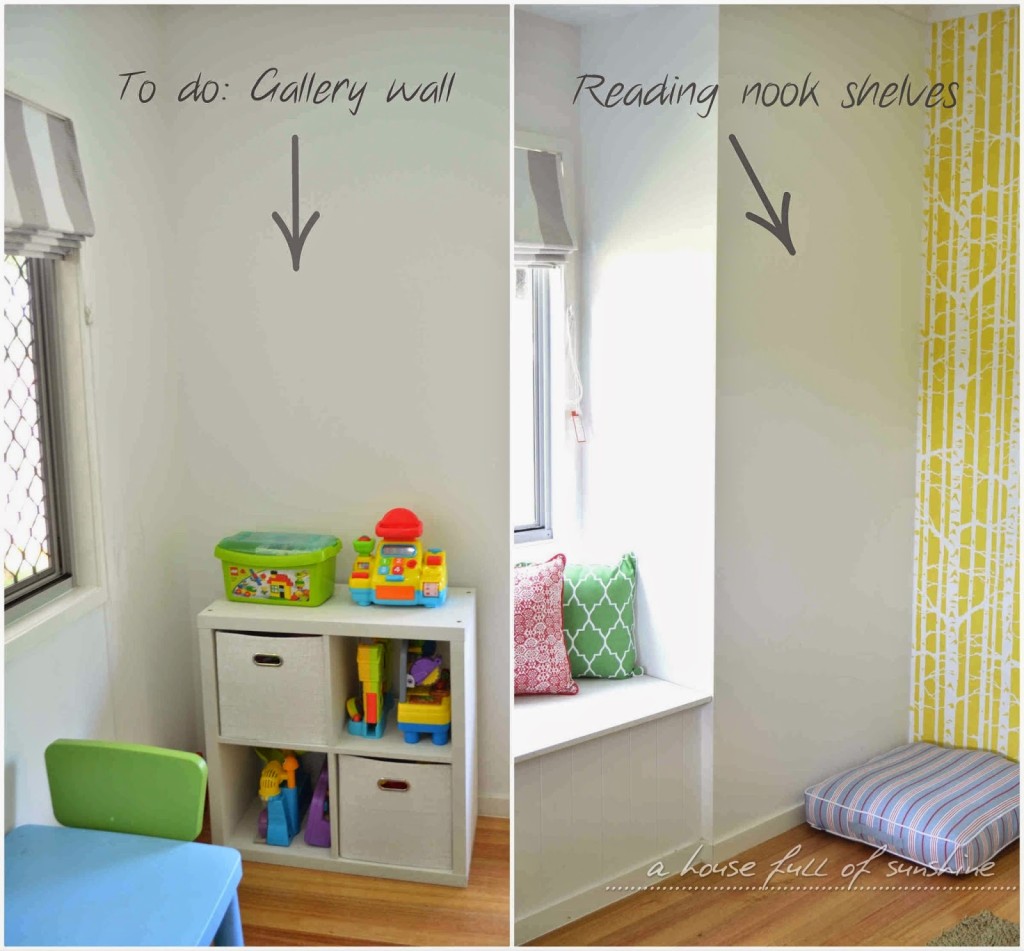 4. Label baskets with pictures of toys, to assist with packing up 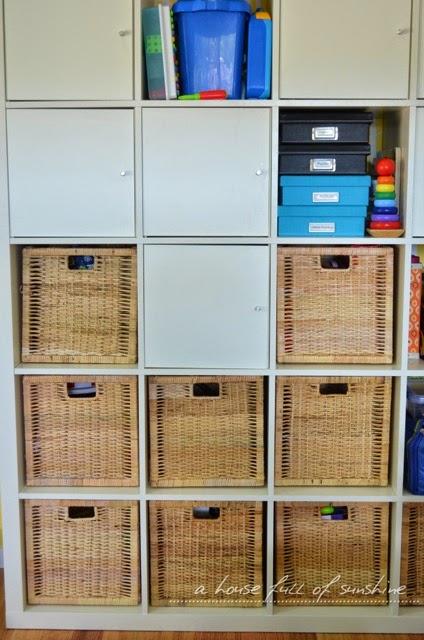 5. Upholster a seat cushion for the window-seat. 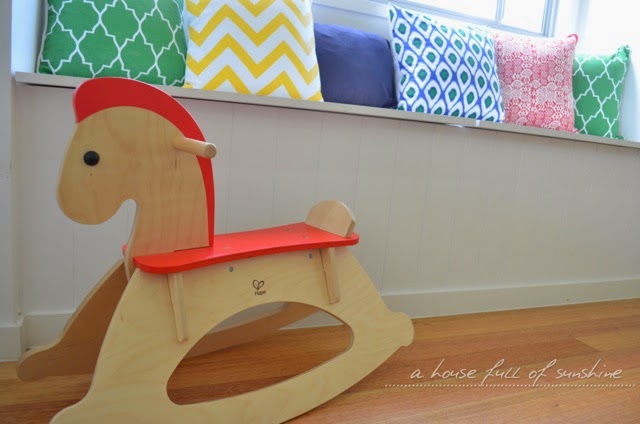 (How cute is this little guy? Rocking horse by Hape.)
Onward to the kids’ bedrooms. Here’s where you really have to use your imaginations.
Aran’s room: 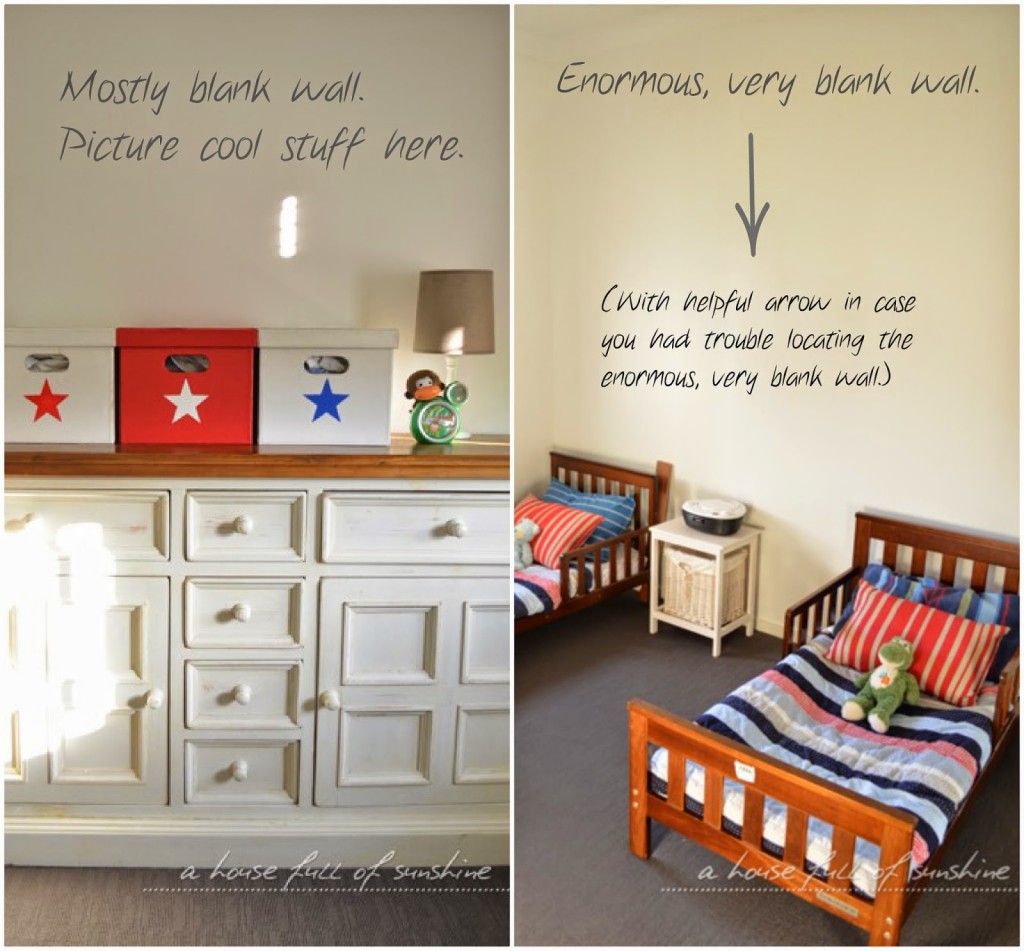 Yep, it’s basically in it’s raw post-move state. The toddler beds are cute, but completely lost against that very tall white wall. (All the rooms have high ceilings, including the bedrooms.)
TO DO for Aran’s room:
1. Paint a patterned feature wall (I have a great concept in mind for this!)
2. Refinish a set of second-hand bunk beds. It’s sad but true – the boys have grown out of those toddler beds. *sniffle-sniffle*
3. DIY two feature artworks for the walls. Hint: power tools will be involved. Yikes!
4. Add a rug and accessorise. Fun!
Jaxon’s room: 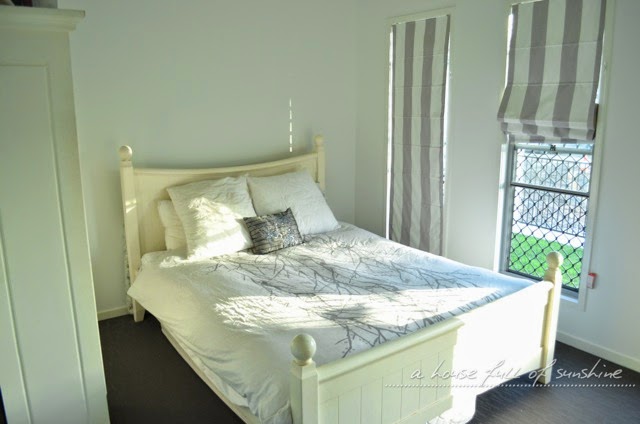 This room was used as a guest bedroom for the first few months after we moved in. The boys were used to being in a room together, and we thought it would ease their adjustment to a new house if we kept things normal and familiar for a while. Now we’ve moved Jaxon into his own room (this one), and we just shift him back in with his brother if we have a guest come to stay.
Long story short, the neutral and boring ex-guest-bedroom is now in need of a bit of colour and personality for a little boy. But because it will also be used by guests, we want to keep things fairly classic in here. This room has already seen some progress in that direction – I’ll be sharing photos in the next couple of weeks!
So that’s our enormous to-do list so far. And there’s still more rooms to come. Stay tuned!
Do you have a to-do list for your house? How’s it going – making progress? Feeling overwhelmed? Bit of both? I’d love you to share!
Pin54
Share
Tweet2
56 Shares