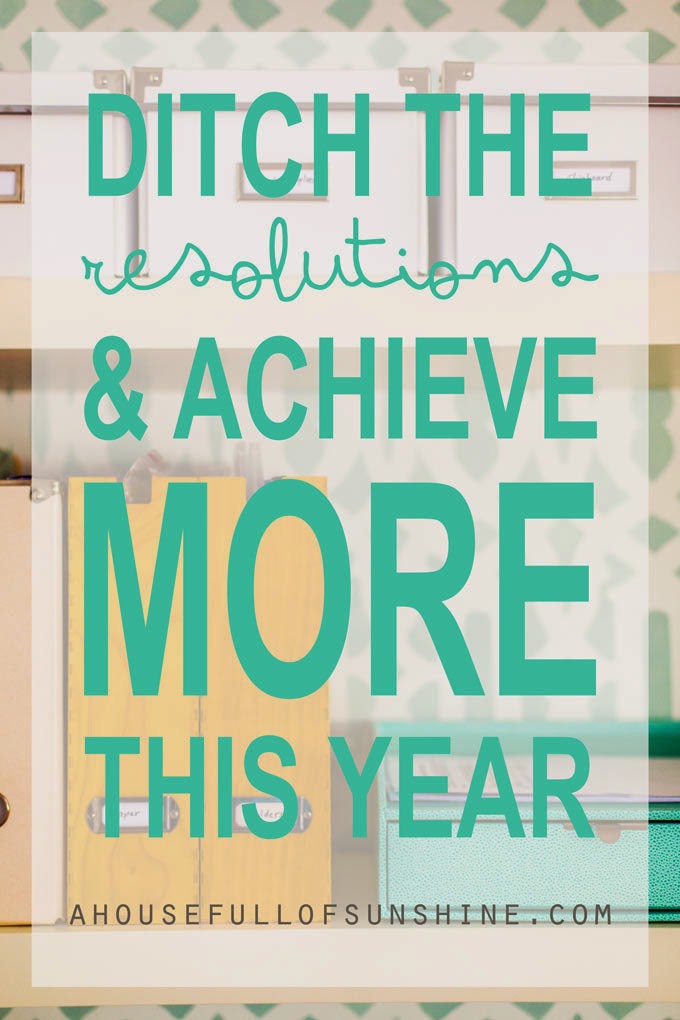 I have a secret. I’m anti-New-Year’s-Resolutions.

Which is kinda funny, because for years we’ve done this thing with our friends on New Year’s Eve where we share our resolutions and invent silly ones for each other. It’s fun and it’s become something of a tradition.

I even did it myself for years, quite seriously, sitting down and writing a carefully thought-out list and adding my signature at the bottom to make it all official. Except that by February, the list had found its way to the junk drawer, and by March it was stuck somewhere in the filing cabinet, which we all know means it will Never Be Seen Again.

Call me cynical, but the one thing this has taught me is that New Year’s Resolutions don’t work.


We’re halfway through January. Let’s be honest. How many of you are still going gung-ho with those optimistic resolutions you wrote with fireworks shining in your eyes and a brand-new untouched year stretching ahead of you?

Looking back at previous years – how many of those resolutions lasted past January? Past Easter? Or (heaven help us) right to the end of the year?

Don’t get me wrong… I’m all for goal-setting and planning to succeed. I’m not trying to rain on your 2015 parade. It’s just that I think there’s one major problem with resolutions. You could call it a fatal flaw.

There are too many of them.


It goes like this. You look at your life in its current state and think about everything you don’t like and want to change. Then you get your pen and paper and make a massive list of all the things you need to do to reach your supposed ideal state of perfection over the next twelve months. The list looks like this:

Lose weight.
Exercise five times a week.
Run a half-marathon.
Eat salads for lunch every day.
Give up wine.
Give up chocolate.
Write a book.
Learn to speak French.
Be a better mum.
Be a better wife.
Take up volunteer work.
Give up TV.
De-clutter the entire house.
Spend more time with friends.
Rise at 5am daily to have Quiet Time before kids wake up.
Read the entire Bible in one year.
Never be late to anything ever again. 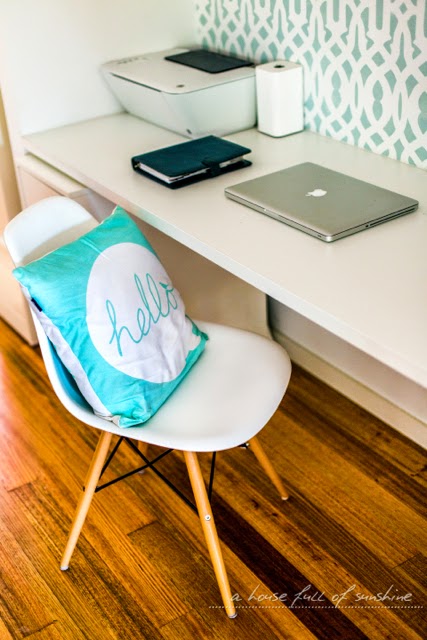 It’s like trying to knock a pebble off a fence using a spray bottle on the mist setting. Your energy is flying off in a thousand different directions just like those miniscule droplets of water. The pebble might get damp, but it’s never gonna budge. What you need to do is tighten the nozzle. Let it rip with one single, focussed, powerful jet of water. And bit by bit, as you continue to squirt that pebble, it will nudge incrementally closer to the edge until finally it falls off.

Okay, so you’ve probably never pictured your life as a pebble on a fence, but you can see what I’m saying, right? All our New Year’s goals and resolutions could be summed up in one mission: A BETTER YOU. But when we try to tackle too many different areas all at once, we diffuse our focus. And our list of resolutions, instead of motivating us, ends up merely documenting our shortcomings. That darn pebble just won’t budge. We get to the end of the year, and we’re just the same as we’ve always been.

I don’t write New Year’s resolutions anymore. I don’t live my life by a list of failures I want to “fix”. I’ve found a better way. And guess what? – I’ve achieved more in the years since I decided to ditch the resolutions than I ever did before. Even better, I’ve grown and transformed as a person.

Want to know my secret?

It’s this: I choose one word for my year. Just one. One word to resonate through my days, weeks, and months. One word to frame my decisions and attitudes. 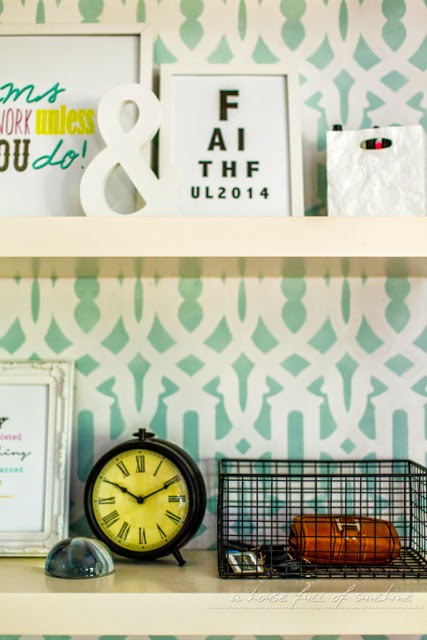 One word is different from a goal or resolution. Resolutions can be broken. They set you up for failure. One word is about the process of transformation. It sets you up for success.

One word is a mindset. It informs your choices and your daily habits. It’s such a little thing… just a seed, really. But planted into a life, it slowly puts down roots and grows.

A list of resolutions is easily forgotten, but even this scatter-brained mother of three can remember one word.

The One Word philosophy has become an enormous movement. Chances are you’ve heard of it already. You can find out more information direct from the source at the My One Word website. You’ll find a treasury of words chosen by thousands of different people, each word unique to its bearer.


Your word is a gift. I’ve found that when I pray about my word for the year, God gives me a vision of how he wants me to grow. The words he’s given me in the past have been powerful. They’ve given me focus and clarity. Unleashed growth. Led to real, long-term, lasting change.

Because after all, it’s better to do something about one thing than nothing about everything. 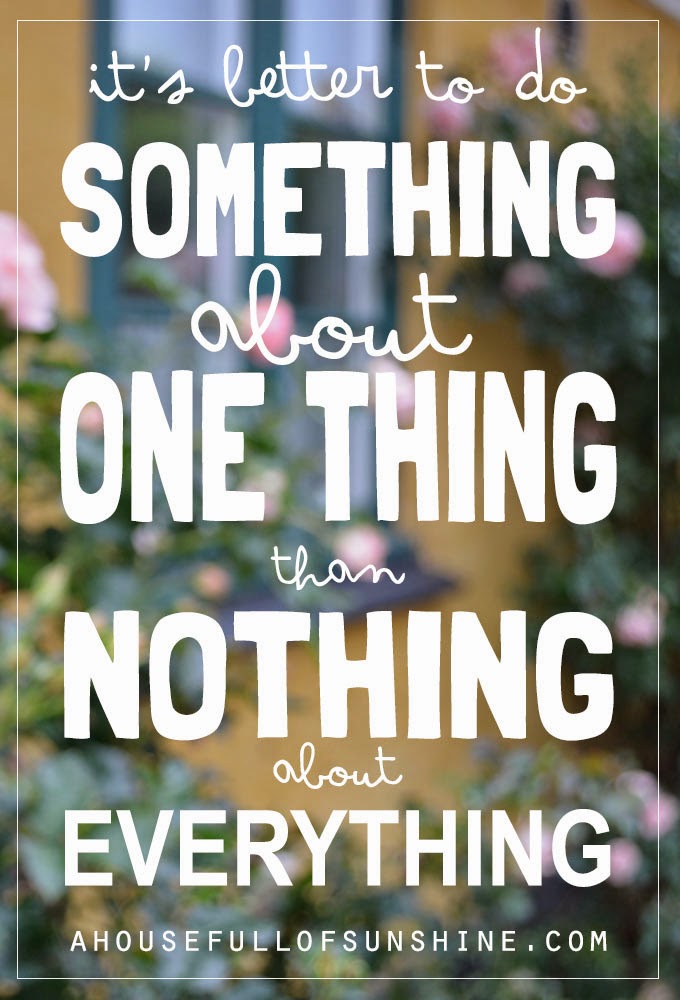 I’m excited this year about growing One Word closer to the woman God wants me to be.

So what’s my word? Stay tuned – I’ll be sharing it in my next post. And yes, my One Word for 2015 may just have something to do with my unexplained absence from this blog for the past five weeks. You deserve an explanation, so I’m going to lay it all out and let you know exactly what’s been going on.

Until then, why not think and pray about your word?

Let’s chat: Have you ever chosen One Word for your year before? What do you think of this concept? Is there a word you feel nudged toward?