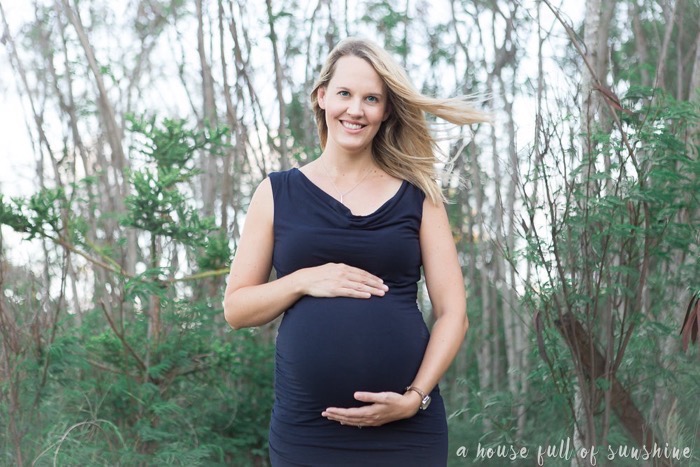 There’s only a week to go until baby Schravemade #4 arrives on the scene. My head and heart are a swirl of different emotions just thinking about it. I mean… ONE week! Really? How is this possible?! In some ways it feels like this pregnancy has lasted FOREVER, but in another sense it doesn’t really seem that long since I first announced our news.

Today, I wanted to give you a bit of a personal update, and share with you these gorgeous maternity photos taken by Toka Photography at 32 weeks. 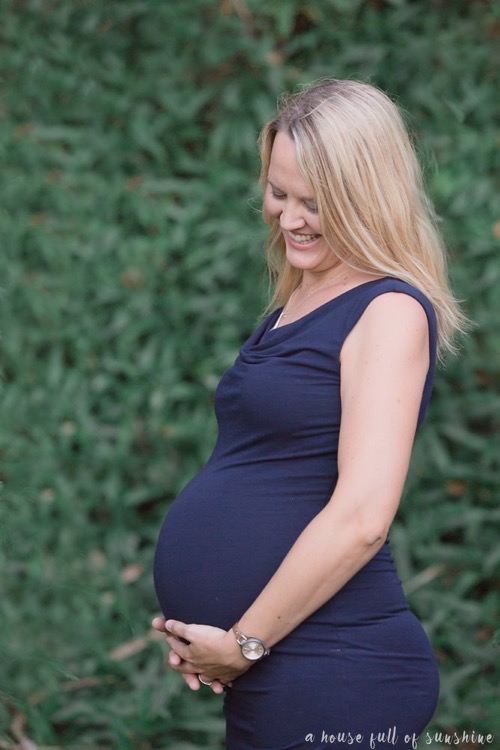 I’ve only had maternity photos taken once before, by a friend who was just starting out with learning photography at the time and wanted some practice. Since this will be our last baby, I really wanted a record to remember this pregnancy by. 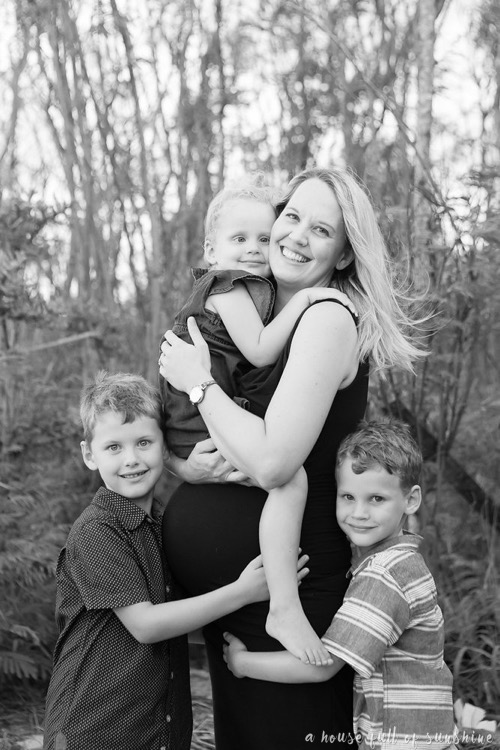 I had amazing pregnancies with my first three kids. I absolutely loved being pregnant, and didn’t find it particularly difficult at all. I had virtually no morning sickness with any of them (apart from a bit of an unsettled stomach some evenings, and feeling a bit “off” some foods) – but I never threw up and I didn’t have ongoing nausea. 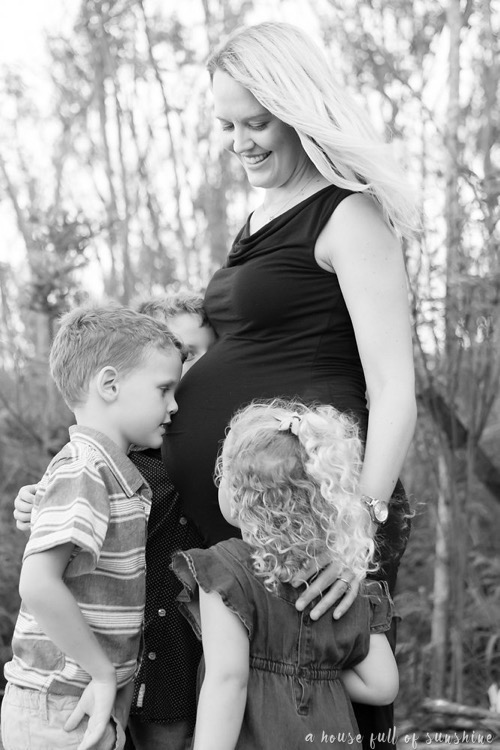 I didn’t even feel particularly uncomfortable towards the end of the pregnancies. None of my babies ever engaged, so I was lucky enough to not have that deep lower-pelvis pressure that most women find a bit unbearable. (That wasn’t such a fantastic thing when it came to labour, but that’s a different story.) I kept fit by going to the gym throughout each pregnancy and doing yoga to keep flexible, so I felt great.

I went ten days overdue with my first, and while this would be enough to drive most pregnant ladies insane, I actually said “no” to being induced because I wanted to avoid any unnecessary intervention, and I was genuinely glad for the extra time. I’d just wrapped up a big writing project, and I wanted some free time just to enjoy nesting and relaxing and pottering around the new nursery before baby arrived. 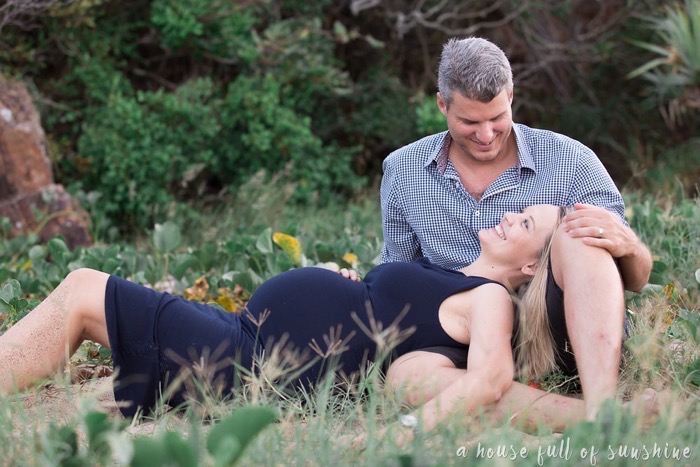 Let’s just say that this time around has been somewhat different! Perhaps it’s just because I’m getting older, and my body’s telling me it’s had enough. I wasn’t particularly fit going into the pregnancy either, as I’d let my exercise routine slide, and I think that made a pretty big difference as well.

The first trimester, I felt nauseous a lot. I threw up at least once every week. While that’s really not so bad in the scheme of things, it was still a bit of a shock to the system for this girl who’d never had morning sickness before. However, I was so excited to be pregnant after a long time of trying that I felt very positive and happy overall. 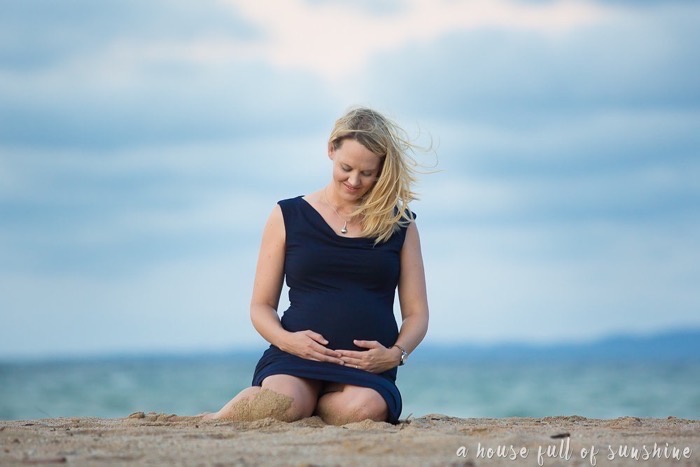 The combination of nausea and tiredness meant I really didn’t feel like exercising, though. So I continued with my gym non-attendance, which turned out to be a naughty characteristic of this whole pregnancy. Oh, plus I took up an addiction to Connoisseur ice-cream. Mmmmmm. “An ice-cream a day” is my current life motto. I figure I can’t have a glass of wine when I’m completely shattered in the evening, so I need some sort of vice to keep me going.

No doubt as a result of all the non-gym-going and ice-cream-eating, I “popped” really early this time around. Plus I think that after three kids, my stomach muscles have basically just given up.

I felt HUGE between 25 and 30 weeks, as I shared in this post on my Facebook page (click through for pics). I literally had no idea how it would be possible for me to get any bigger. It probably sounds really lame, but I actually felt pretty worried about it. I already felt so stretched-out and uncomfortable – I was sure I was going to end up needing a crane to get me out of bed! 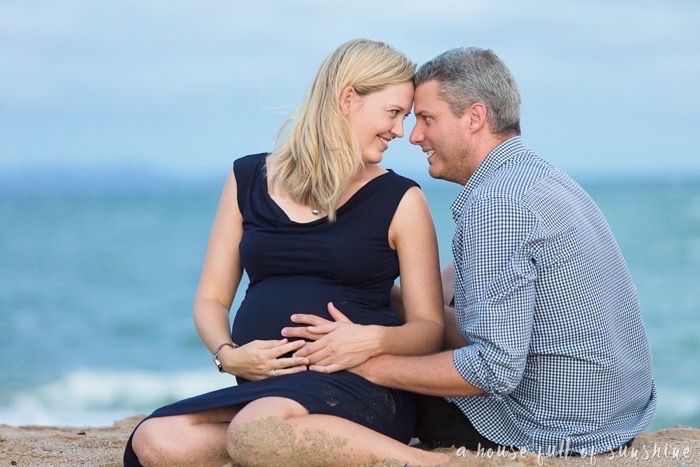 It’s also really hard not to compare yourself to other people. I’ve always struggled with this, as I shared in my book. One of my close friends was two months further ahead of me in her pregnancy, and I was exactly the same size as her. People used to regularly ask if we were due at the same time. It was kind of embarrassing.

Another friend announced that she was 20 weeks pregnant when I was 26 weeks along (and already huge)… except she wasn’t showing AT ALL. I mean, literally, not at all. She even pulled up her shirt to show me her completely flat stomach. Meanwhile I was smuggling a hippo under there, and there was only a month and a half difference between us. Seriously, where was her baby hiding?! I kind of hated her a little bit. (It was her third child, too – how come HER stomach muscles hadn’t given up like old elastic?!) 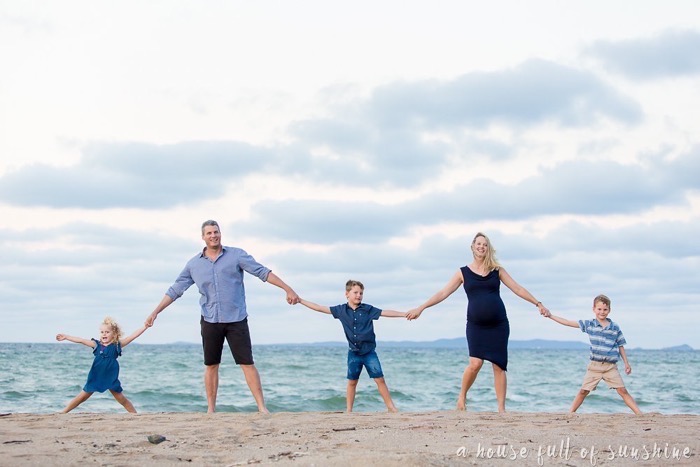 I had to give myself a mental shake and a stern talking to so I would stop the silliness. Because really, it was silly.

Yes, people were constantly telling me how BIG I was (a real feel-good comment to make to a hormonal pregnant lady – ha! I got this a LOT!) … but why should I let it worry me? It’s not like I can control how my body responds to pregnancy, and everyone carries differently. And besides, there’s no way I’m giving up my ice-cream. 😉

Really, I’m just so grateful that I’m carrying a healthy, beautiful baby. There are people who would give anything to be in my shoes, people for whom an absolutely enormous belly would be simply a confirmation of the most wonderful blessing imaginable. 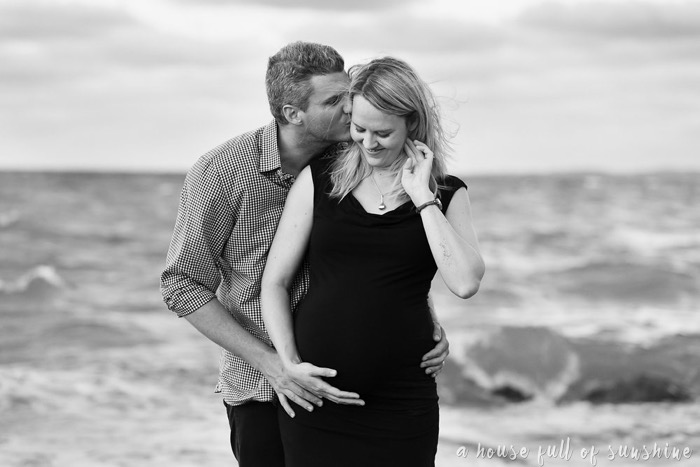 Luckily, my rapid tummy-explosion slowed down after a while. I haven’t changed in size all that much since these photos were taken at 32 weeks, even though I’m now 37 weeks along. It’s kind of funny… people have gone from commenting, “Wow, you’re so BIG!” to, “Wow, you’re so small for how far along you are!” … which is pretty hilarious, really. And just goes to show that I can’t afford to rate my self-worth on what others say about me.

Baby is still healthy and growing just fine; my tummy just feels a lot harder and more compact now, as if there’s more squished inside there (which there certainly is.) And I haven’t yet needed a crane to get me out of bed… although some days I could probably do with one. 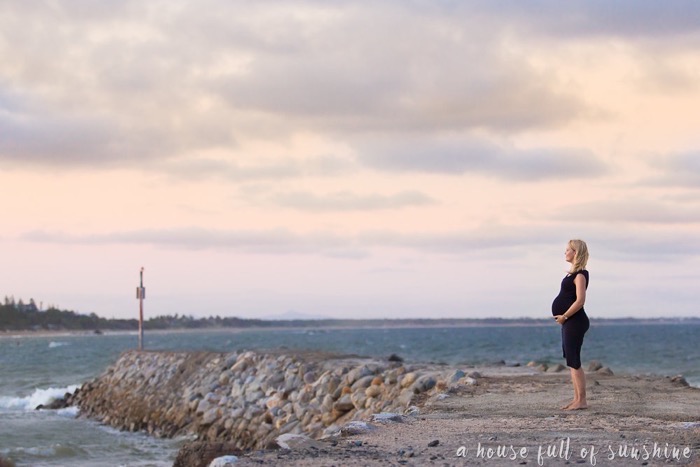 While I experienced an awesome energy burst in my second trimester, this last trimester has been characterised by sheer exhaustion. I get pretty bad insomnia when I’m pregnant, and it’s been worse this time than ever before. 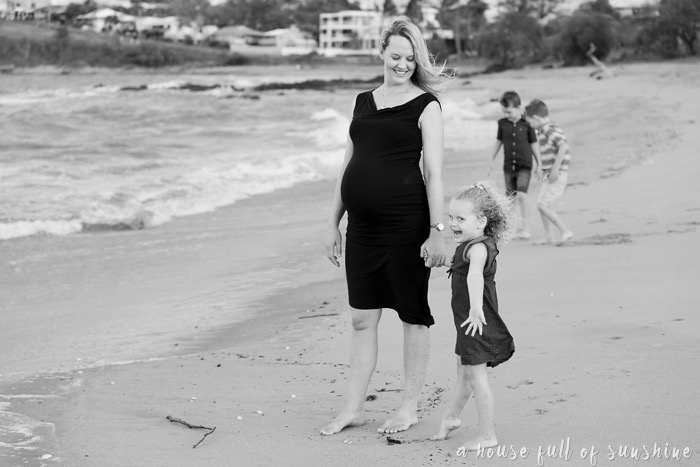 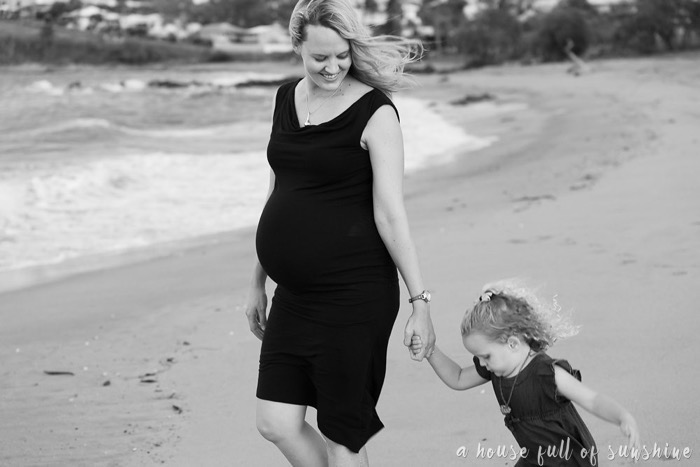 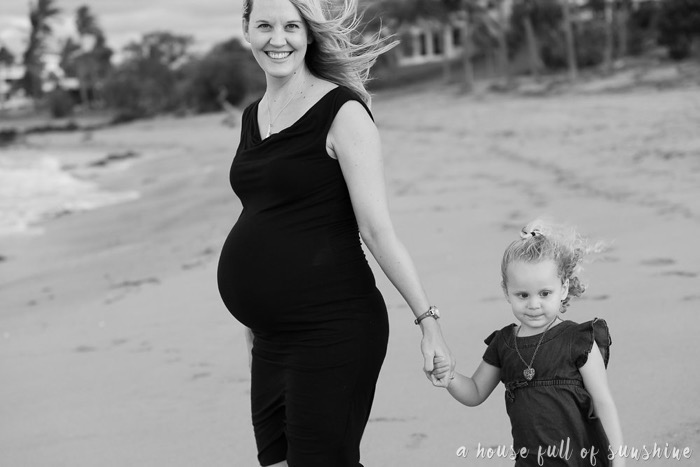 Basically, I wake up at 1 or 2 am every night, and then I can’t get back to sleep. For hours. Usually I start feeling sleepy and drifting off again at around 5.30am, which gives me exactly one hour before the kids are up and we have to start getting ready for school.

I often struggle during the day to stay awake. I’ve gone from being a non-coffee drinker to having a cup most days in order to function. Sometimes two. (Pregnancy is not really the ideal time to take up a caffeine habit, but hey… survival first.) 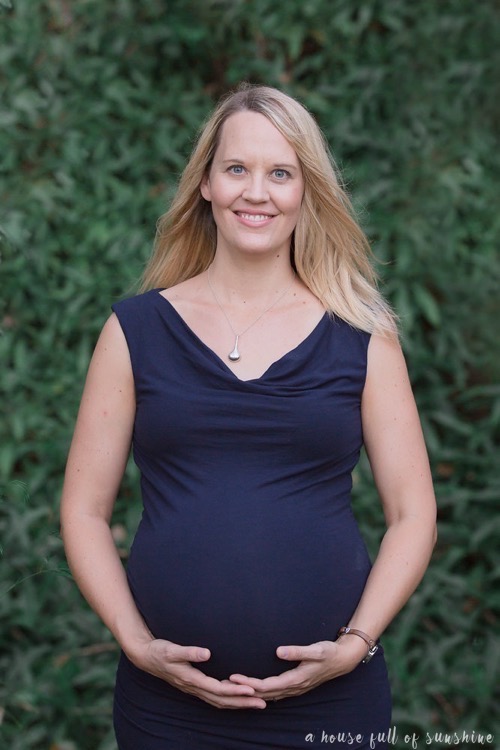 All in all, I’m so ready for this baby to arrive. I’m exhausted, I’m uncomfortable, and I’m OVER being pregnant. We already knew we would be done after baby #4, but I mean, we are REALLY done. My body is drawing the line. 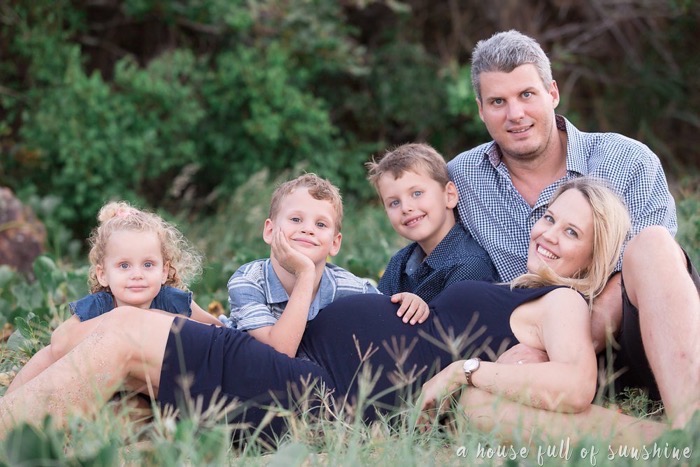 Nevertheless, I feel extremely blessed. I’m so excited to meet our new baby, and the anticipation is building with each passing day.

We know what we’re having, but we haven’t told anyone else… except my Grandma, who is dying. I wanted her to know. 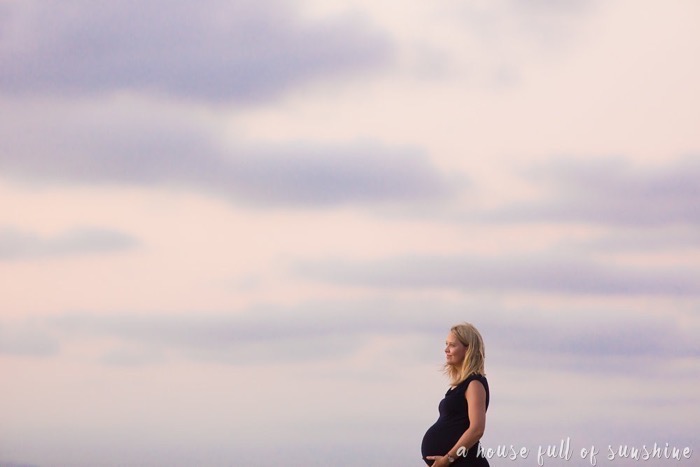 It’s a complicated mixture of emotions, expecting a child. I know that having a newborn is going to be chaotic and exhausting and wonderful, just as the others were. I wonder how I’ll cope with four children, when the three I have already often do my head in. It will be a juggle and a balancing act and just plain hard work. 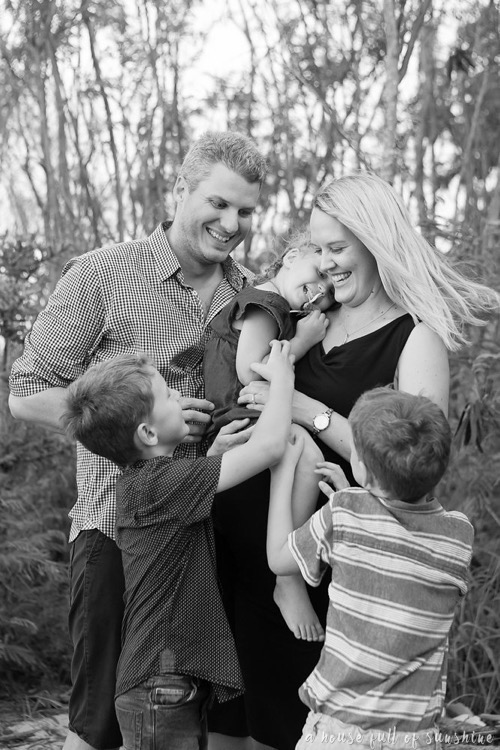 But I look at these photos, and I feel truly blessed. God has given us our hearts’ desires. To that scared and hurting, infertile young woman years ago, he whispered, “Do not fear, for I will bring great fruitfulness to your family.” 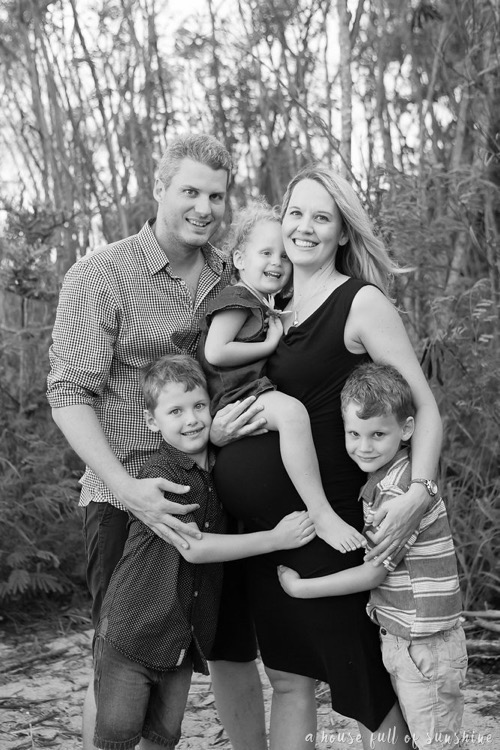 I’m looking forward to sharing our baby news when our little bundle arrives. Things will be a little quieter around here for a while, because I plan to be doing lots of baby-snuggling for a good while, and resting when I can. Thanks for your endless patience with me – I’m so blessed to have such wonderful readers.