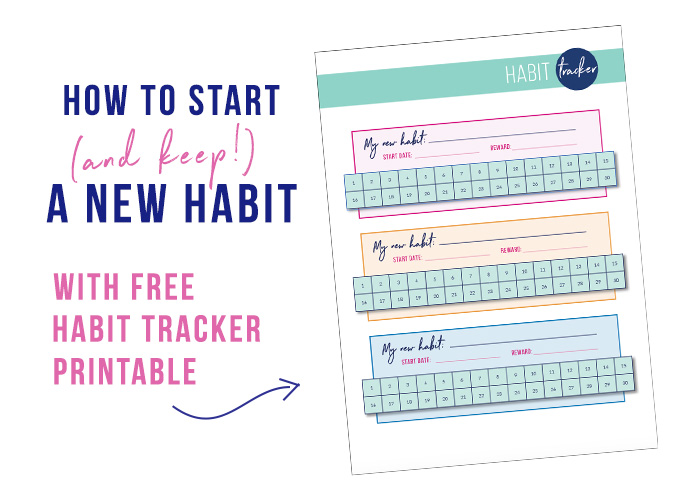 It’s the start of a New Year, and we’re all trying to be better versions of ourselves. I’ve got a few goals for this year – lose the lingering baby weight, be more mindful of negative thinking patterns, cut down on Facebook, and create routines such as task batching and automations that support my blogging goals.

It all sounds fantastic, but let’s be honest, any one of those things could be a massive struggle to actually implement. I have four small kids, and like all of you, I’m always so busy. I struggle just as much as the next person with balancing life and managing my time wisely.

The good news is that creating habits can take a lot of the struggle out of pursuing your goals.

Imagine if reaching your goals happened virtually on autopilot. What if you automatically took small actions every day without really having to think about them, and those small actions all added up to create the life you desire?

That’s the power of habit.

(Incidentally, I believe in this so strongly that I’ve created an entire printable planner system dedicated to making your big dreams into daily habits. It has the structure to help you actually implement your long-term goals, with monthly, weekly and daily follow-through. It also has space to track your progress in a specific area each week, so you get a visual of how you’re doing. You can see what people are saying about it and take a look inside the pages right here.)

So, you know habits are important. But how do you start a new habit… and actually keep it going? Here are my top tips.

Work on your new habit for at least a couple of weeks before adding in a second habit. Don’t try to change everything at once – you’ll likely get overwhelmed and then give up.

Use a tracker like the one at the end of this post to keep yourself accountable and view your progress. There’s a psychological snowball effect that comes with doing this. You gain momentum, and it becomes almost a game. How long can you go without breaking the chain?

I’m using an app called Productive to list my daily habits. It gives a visual log of my progress, and with the paid version, I can set reminders at certain times of day. You could also simply set a recurring alarm on your phone at certain times, and label the alarm with the name of the habit you want to complete at that time.

Research shows it’s easier to stick with a new habit if you implement it at the same time every day. Repeating this habit at the same time every day for 30 days will create a routine that becomes virtually automatic. For example, one of my goals this year is to make a green smoothie every morning. If I figure I’ll get to it any time before lunch, I’ll get distracted by other things and forget about it. So I aim to make my smoothie first thing, by 7.30am.

I first learned this technique from a Tony Robbins book years ago. A trigger is basically a set-up you create right before you take action on your habit. It’s a small action that you can do without much thought, that acts as a cue.

For instance, to kickstart my green smoothie habit, I head straight to the kitchen after I give baby Charlie his morning bottle and take out the ingredients I need from the fridge. One thing triggers the next. Your trigger might be dressing in your gym clothes as soon as you get up. Or flicking a rubber band on your wrist when you feel yourself getting angry, to remind yourself not to yell at your kids. Or getting out your Bible and prayer journal when you put your lunch on the table so it’s there, ready to go.

If you’re trying to give something up (say watching too much TV, smoking, or eating junk food), it’s easy to think of it as a restriction. But it’s human nature to dislike being restricted, and you’ll only end up wanting to rebel against that.

Instead think about what need this activity meets in you, then figure out a way to replace it.

For example, if smoking or watching TV helps you relax, try meditating or reading a book instead. If eating junk food helps you release negative emotions, try journalling or calling a friend to vent.

One of my goals this year was to cut down on my Facebook use (which is a whole post in itself!) Now when I pick up my phone during “bored” snatches of time throughout the day, I use that few minutes to track my calorie intake on an app. It’s a much more productive use of my time that takes me a step closer toward my goal, and it meets my need of momentary distraction from the ho-hum daily routine. It’s also finite – it takes a few minutes, then it’s done, so I can’t get sucked into mindless scrolling.

It’s very hard to make meaningful progress toward a goal if you have an “all or nothing” approach. For example, if you miss going to the gym three times in a week, and so you give up and stop going altogether. Small steps towards a goal do add up, and moving forward at any pace always beats standing still. Just print off another tracker from this post and start again at day one. Make it a game to beat yourself. If you managed to keep your habit for 12 days in a row last time, see if you can go longer this time.

Realise that negative thoughts have no power to stop you reaching your goal.

Many of us get caught in the trap of negative self-talk when we aren’t immediately successful at implementing a new habit. We might hear a running internal commentary that tells us, “What’s the use? I suck at this! I’ll never be able to do any better! It’s too hard.” This has been a huge issue for me over the last couple of years, so I’ve been doing a lot of reading about it lately. Here’s a tip that has really helped me:

Instead of fighting those thoughts or struggling to reframe them into something positive, try simply observing them. Understand that thoughts are simply a story we’re telling ourself. The story is not necessarily helpful or even true, and it has no power over us unless we buy into it. We all have negative thoughts, but they have no power to stop us moving in the direction we want to go, unless we choose to accept them, believe them, and obey the message they’re telling us.

Instead, try creating distance from your negative thoughts by telling yourself: “I’m having the thought that… (I suck at this. It’s too hard. etc)” Observe the thought, understand that it’s just a string of words, then continue taking your desired action despite it.

My friend Brittany wanted to do better at blogging, so she formed a small Mastermind group of people who were all well ahead of her on the journey – bloggers who are getting high levels of traffic and making consistent high-figure incomes. (Side note, I’m in this group and I’ve learned a lot from these other ladies, some of whom are making 20-30K per month on their blogs – you can read about some of them and find out how they earn money blogging from home in this post.)

Brittany deliberately chose to lift her sights by aligning herself with people more successful than her. We become like those we associate with the most, so if you want to get fit, hang out with people who value fitness and exercise regularly. If you want to give up smoking, stop hanging out with the smoking crowd on your lunch breaks. And so on.

There’s a built-in accountability that comes from announcing a goal. You might want to choose an accountability partner to check in with regularly, or simply announce on Facebook – “I’m challenging myself to hit the gym every morning for the next thirty days! Who’s with me?” Perhaps you could form a private FB group to spur each other on.

When you hit thirty days without a break, reward yourself! Treat yourself to a massage, buy yourself a new book, go out for coffee with a friend, or go to a movie. You deserve it!

Rewards are a great incentive when you’re getting started, but the best thing about forming a new habit is that after a month or two, keeping the habit becomes its own reward.

Remember the “why” you started out by writing? Maybe you acknowledged that your new habit would help you feel better, have more energy, sleep better at night, feel more connected to your loved ones, feel calmer and more organised, or any number of other positive attributes associated with your chosen habit.

Once you’ve done the hard yards and pushed through the initial resistance, the positive changes your new habit brings to your life will motivate you to stick with it for the long term.

I hope these tips help you. Don’t forget to download your free habit tracker below! And let me know in the comments – what’s one new habit you want to start this year? Remember that sharing your goal helps to build accountability. 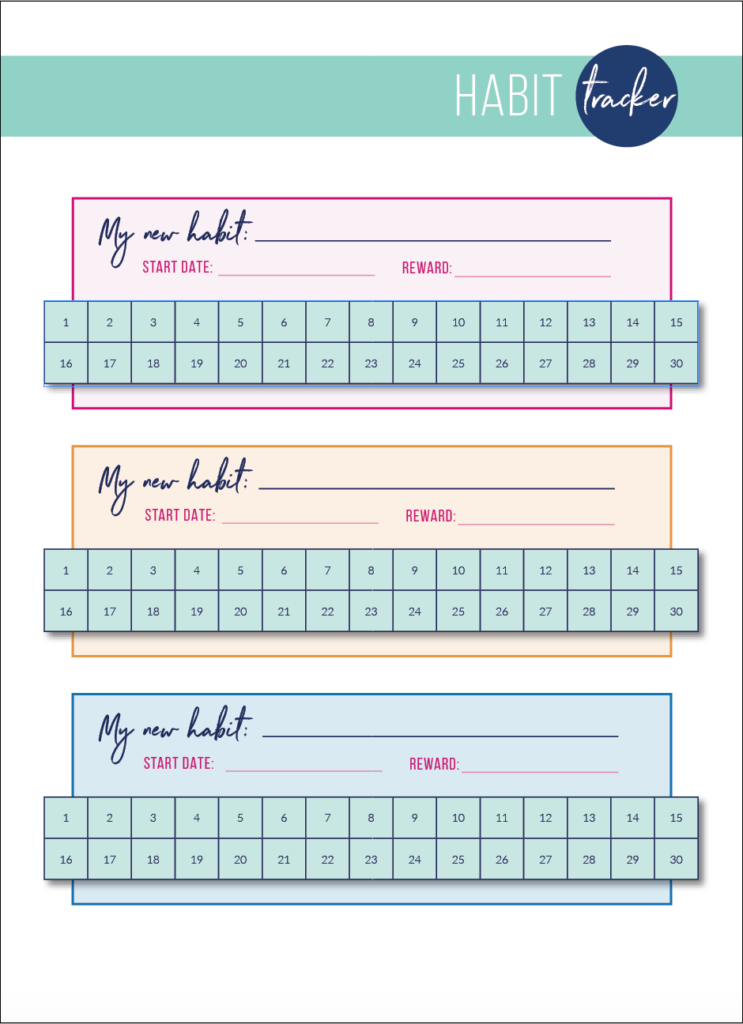