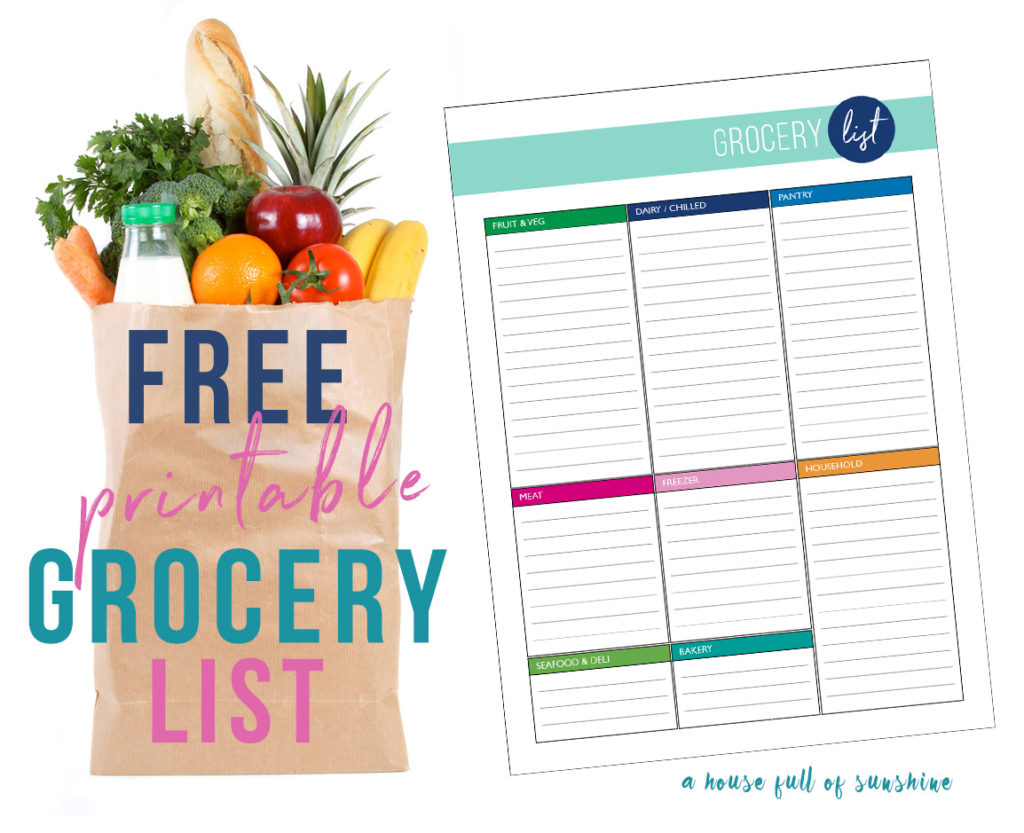 Hey friends!! How is everyone’s New Year going? Not so new anymore, is it, huh?

January is usually the time I like to get organised for a new year, do some decluttering and put some new systems in place. I say USUALLY because this year so far has been TOTAL CHAOS. And now it’s February already and let’s just say, I’m still not even remotely close to feeling organised.

In Australia we have our long summer holiday over the Christmas/ New Year break, so my kids have only just gone back to school a couple of weeks ago. And now I’m cracking open the champagne, because I’ll be honest – those school holidays nearly killed me.

I mean, I’m talking chalk line around my body, dead.

(I say “nearly” because what mother is ever gonna get the chance to lie down long enough for someone to draw a chalk line around her? WE DON’T EVEN HAVE TIME TO BE DEAD. There’s always at LEAST four more loads of washing to do first.)

It was my first “long break” ever with all four kids at home, and I pretty much went into survival mode. Like Bear Grylls, only with more stubble and less appetising meals.

On the whole, I was proud of my survival skills. I neither died nor killed any of my offspring.  Most days I had two actual shoes on my feet and all four kids wearing actual clothes (of any description, I have no standards left) before we went out in public.

There was stuff I meant to do that didn’t get done, such as shaving my legs, eating anything that didn’t come from a can, and doing anything whatsoever to promote my planner. (If you are in the market for a planner, it’s great. There ya go. You’re welcome.)

My middle son has a sensory processing disorder, and he regressed big time over the break, as he really struggles with a lack of structure. I battled some major behaviour issues from him, and the others picked up on that and started acting out as well, each in their own special little way. We had some serious attitude from the eldest, manic craziness from the sensory son and tantrums from the 4 year old.

Let’s just say I had the time of my life. Sorta like a trip to Disneyland, only not at all.

(Lucky they’re cute, right? I’m preeeettttty sure it’s the only thing that saves their lives some days.) 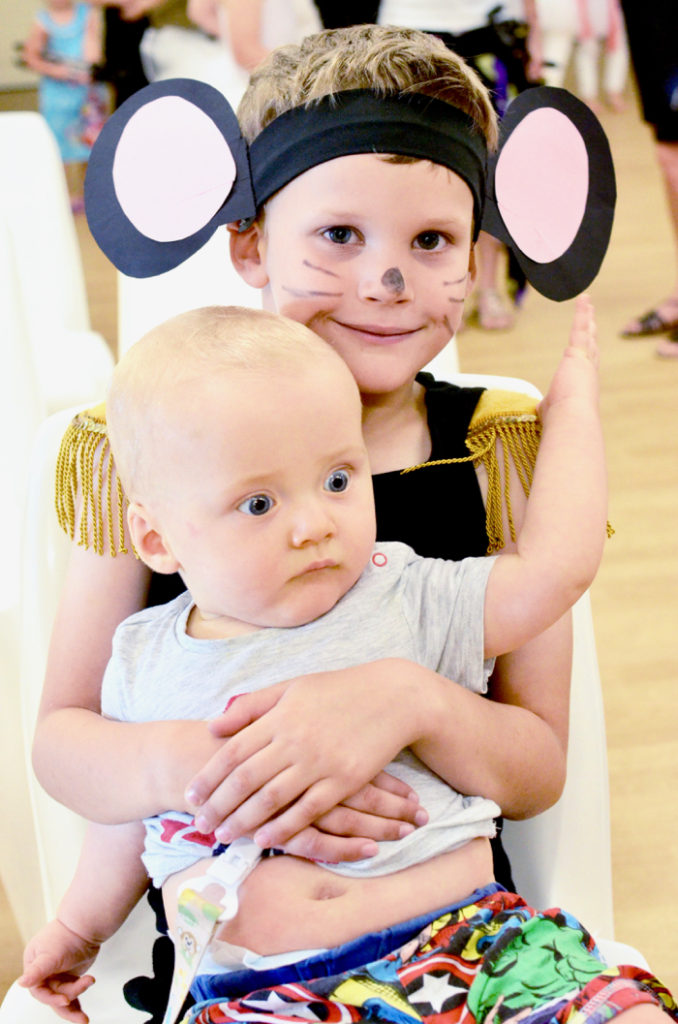 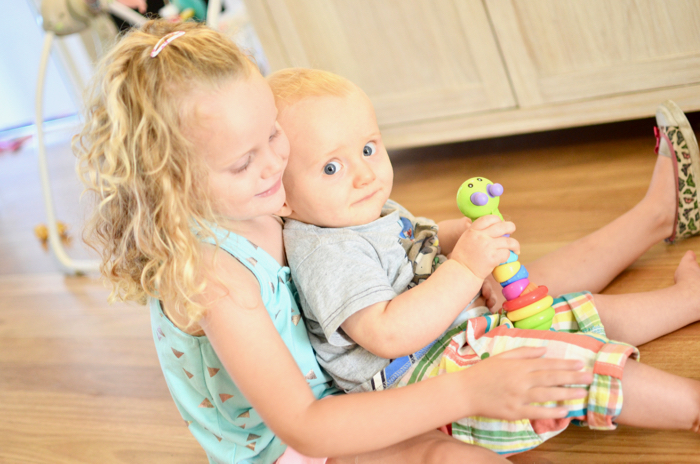 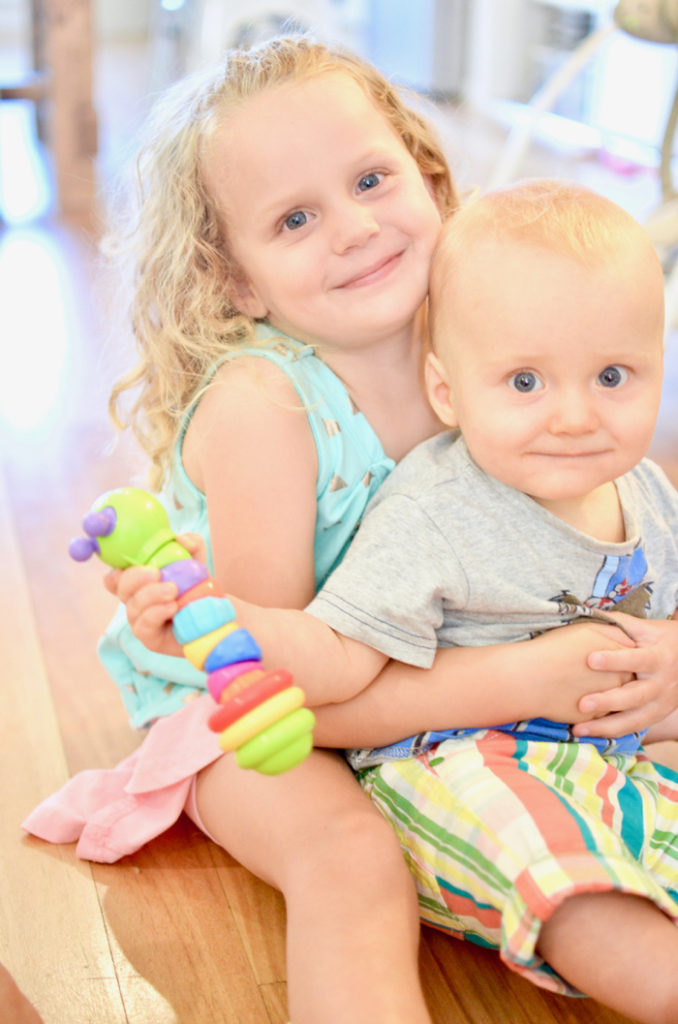 It was also hard trying to figure out how to juggle four kids’ needs all at once. Mums of small children will understand when I say I felt pulled in a million different directions – all the time. I was forever running from one crisis to the next. No sooner would I start to do something than there would be a scream or a wail from somewhere in the house. The older kids would get into a fight while I was feeding or changing the baby, or if I was setting up an activity for the older ones, I’d have to drop everything to run to Charlie before he put some small object in his mouth. (He’s begun crawling. The older boys like Lego. ‘Nuff said.)

And he is a GOOD baby. Honestly, he’s so super cruisey. My sanity is currently dangling by a thin thread named Charlie Benjamin. That gummy smile brings me so much delight.

(Even if he IS into everything right now and loves eating disgusting things such as the half-chewed piece of mystery meat he found under the table, and hairballs from our shedding rug.) 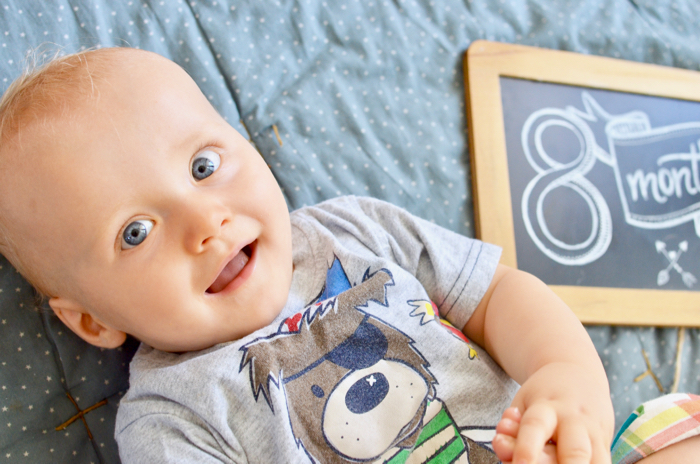 (Hi! I’m Charlie! And I’m actually 10 months old, not 8 months, but Mummy hasn’t gotten around to drawing a new chalkboard sign for this month yet! Or last month either, for that matter!) 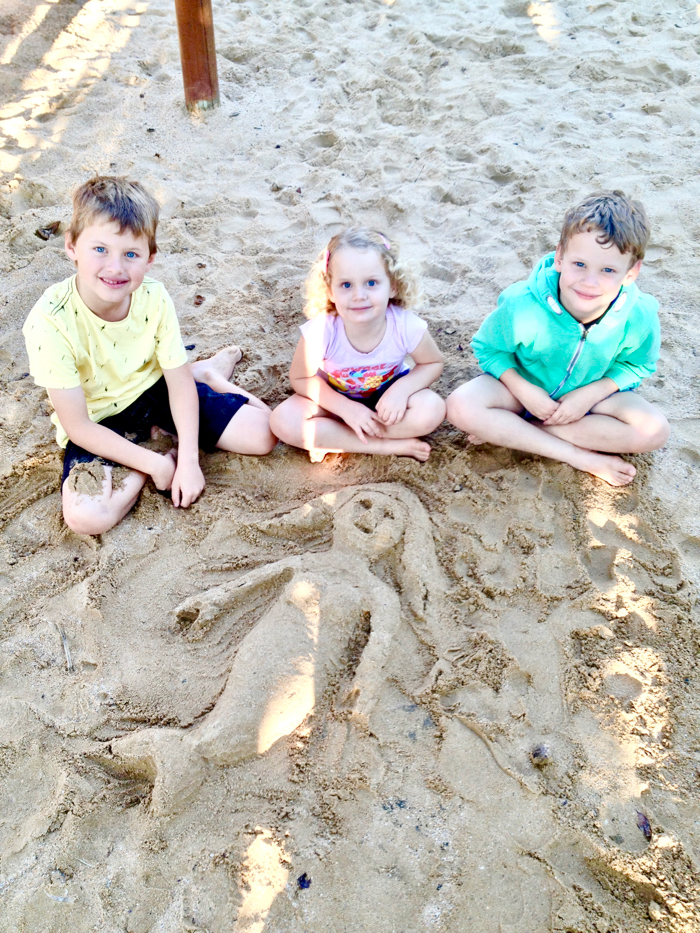 Look, they’re all adorable. It’s undeniable. Now that I’ve had a 2-week break from their constant presence I’m looking through their photos for this post and feeling all sentimental and telling myself, “oh come on, it can’t have been all that bad.”

I KNOW for a fact how much I’ll pine for this age once they’re older. They’re already growing way too fast.

But seriously, if you’d told me two weeks ago you wanted to buy my kids,  but you’d left your purse at home, I’d have accepted a ten cent piece and an IOU scrawled on a gum wrapper. I was spent. Completely done. Nothing left in the tank.

My house was trashed, the laundry pile had become a local landmark with guided tours to the summit, and apparently the only way to get a small human to listen to a solitary word I said was with a scream that would raise the hair on a feral cat.

Now that they’re finally back at school, I’m on a mission to get my life pulled together again and get some things running a bit more smoothly.

In short, I need to find my sanity, peeps!! I hate clutter and hate feeling disorganised, and for the past two months everything has been one big disorganised mess.

So. When I’m feeling massively disorganised in general, instead of getting overwhelmed by it all, it helps if I start by tackling one small area that’s been bugging me.

I’ve been using a plain list pad for yonks. I had vague areas on the list that were for different things, so I could roughly group categories together – fruit and veg sorta down the bottom, meat and bread sorta up the top, pantry stuff somewhere in the middle and dairy/ freezer squished over on the right. It was exactly as inconvenient as it sounds. I always ended up squeezing extra margins in and drawing boxes around sections and running out of room and putting things in the wrong spot because I estimated the location on the page all wrong. Then, at the store, I’d end up doubling back to the same aisle three times because I kept finding more items buried in different random places on the list.

For ages I’ve been wanting to create a grocery list printable to nail this sucker once and for all. A list with actual categories!! With enough space for everything! (Yes, I can hear that Hallelujah chorus again just thinking about it.)

So, I finally did it. I created my own beautiful printable grocery list. 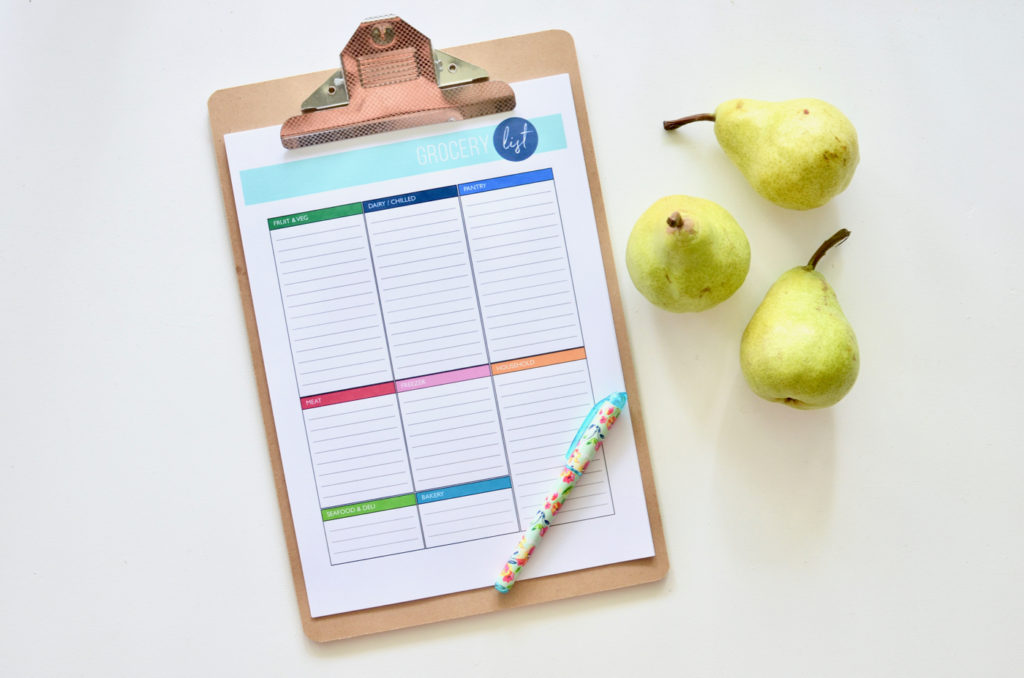 I keep my new stash of pre-printed lists clipped up on a clipboard, which I’ve attached to the side of the fridge with velcro strips. Now when I think of something I need, I can easily jot it down in a central place.

Okay, tell me if this is too weird. When it’s time to go shopping, I actually cut up all the columns with a paper trimmer and staple them together in the order of the aisles at my store. So when I’ve finished with one section, I can just rip it off and throw it away. Too OCD??

I might as well just go ahead and admit that I love my new system. No more crowded list overwhelm. No more reading over the same section three times trying to remember which things I’ve already bought and which are still to go. My brain is mush, okay. It’s scientifically proven that brain cells die with each pregnancy. I have FOUR KIDS. I need to keep things niiiiice and simple. 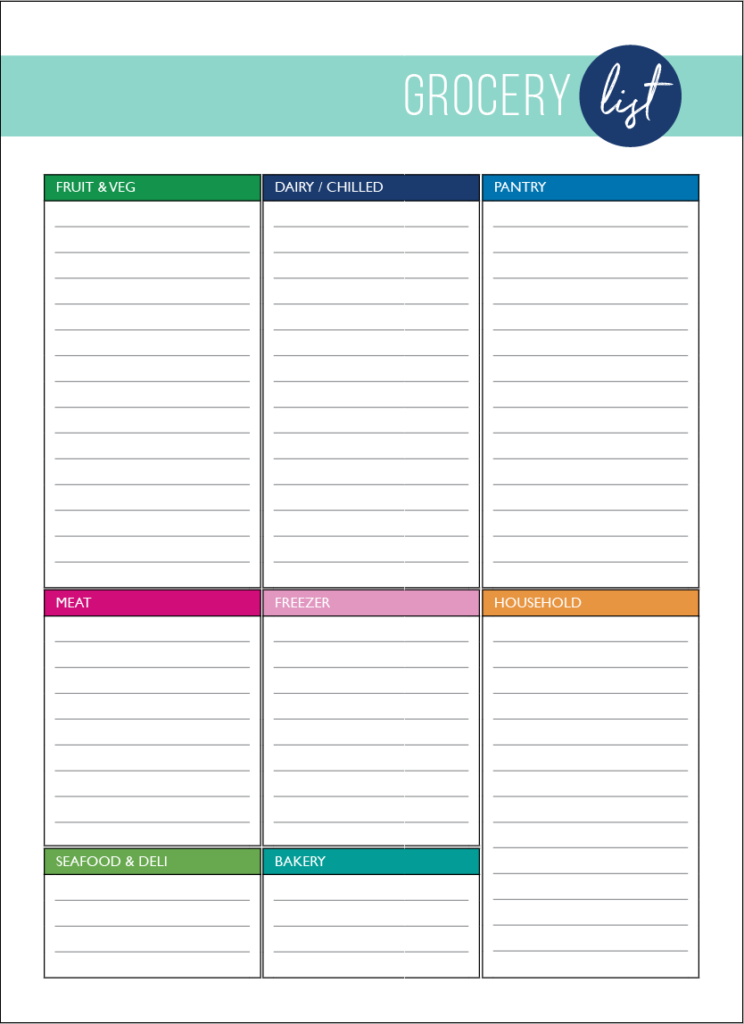 Anyhow, you can download your own copy here for free, my friends. You’re so very welcome. I hope it helps you love grocery shopping even more. (HAHAHAHA!) Or at the very least, not loathe it so much that you’d rather do ABSOLUTELY ANYTHING ELSE, such as stick toothpicks in your eyeball one at a time until you go blind.

Right – inspire me, please. How’s the New Year’s resolutions shaping up for you thus far? What are you doing this year to get organised?