Sick of the Clutter? Sign Up Now!
Jump to recipe 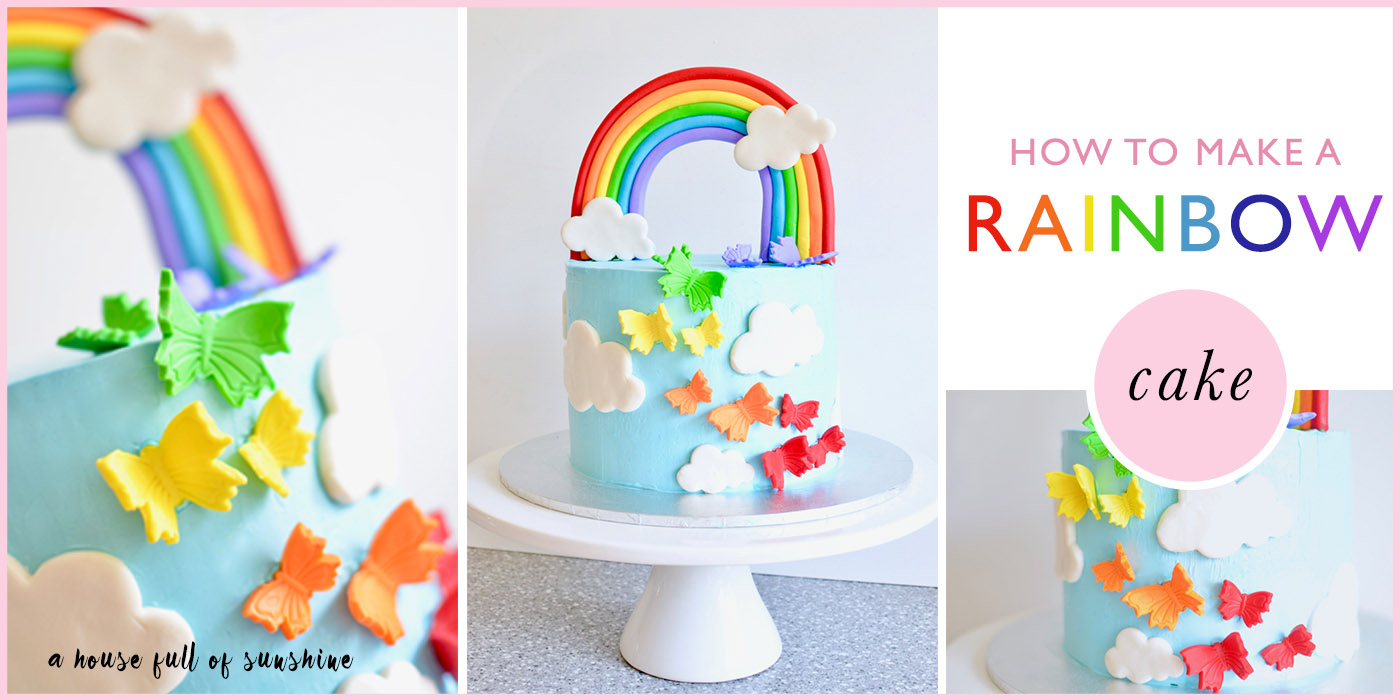 It was my daughter’s birthday and I needed to know how to make a rainbow birthday cake.

Her favourite (read: ONLY) song to request at bedtime is “I can sing a rainbow”, so therefore I have sung it approximately 12 thousand times in the last two years. How could we NOT have a rainbow party?

If you’ve been here a while, you will know that I am not a cake decorator. I mean, seriously, I have no idea what I’m doing.

So my cake-genius friend stepped in to save the day. Instead of just making the cake for me, she showed me her process step-by-step, and let me help.

I use “help” in the loosest sense of the word. In the same way a toddler “helps” to fold the washing by spreading all the clothes all over the floor and then playing in the laundry basket.

I don’t deserve any credit for this glorious creation – my contribution was mostly along the lines of, “ooh, could you do that again so I can get a photo?” I also added some colouring to some fondant and played with it. I’m extremely clever.

And then in a dramatic twist at the end, I had to assemble said glorious creation, which caused me heart palpitations, and I nearly destroyed the whole thing. 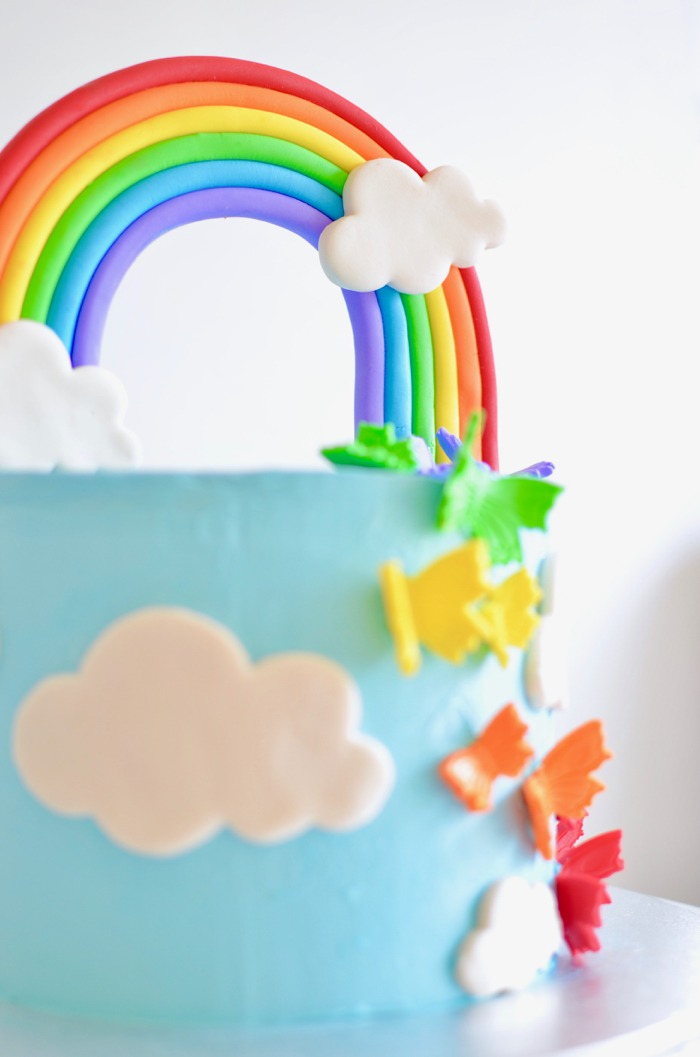 I BROKE THE RAINBOW. (Luckily I also fixed it.)

So I’m not gonna lie and say, “TRUST ME, IT’S EASY!” – because as far as I’m concerned, cake decorating is about as easy as performing aerial acrobatics while reciting the periodic table of elements.

But I will admit that, with a grown-up person holding my hand and schooling me in her secret ways, this project actually did seem achievable. Even for a person like me who has a pathological fear of decorating cakes. It’s amazing how a few little tricks of the trade and the right tools can make all the difference in creating a professional result. And doesn’t it look pretty?!

You should totally try it. Here’s how. 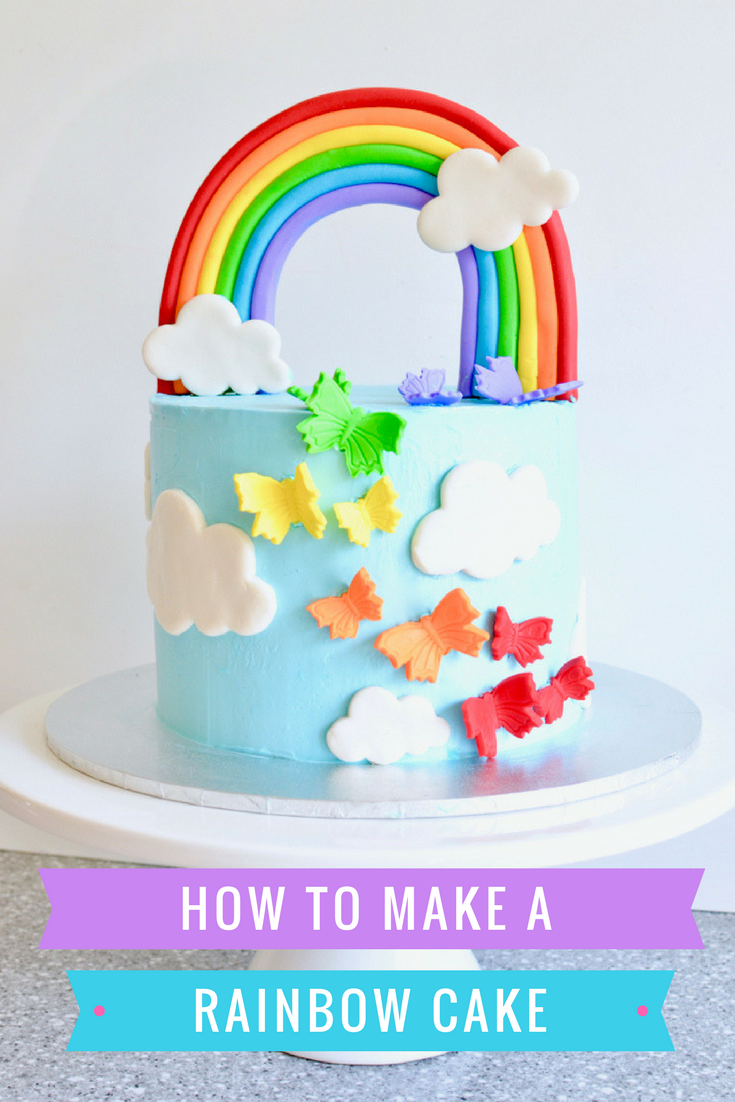 How to make a rainbow cake

First we split the fondant into six balls. We added a few drops of the paste colouring to each and worked it through the ball (like playing with playdough) until it was bright enough. A rainbow technically has seven colours, but we left out the indigo. The order you need is: Red, orange, yellow, green, blue, indigo (optional), violet.

Then we added a sprinkle of CMC (Tylose) powder to each colour and worked it through the fondant. This powder is what helps the fondant set really hard, which you need if you’re making a cake topper that has to stand up and support its own weight.

We set aside a little of the fondant in each colour for the butterflies in step two. Then we rolled each remaining colour into a long sausage shape, using a fondant smoother to get an even finish. My friend uses a silicone mat so the fondant doesn’t stick to the bench. (You can’t use flour, because it would ruin your colours.)

We lined up the colours in order and then curved them into an arch (tip: curve the whole thing around a glass to get it even). Important: make sure you measure the span of the arch to ensure it’s the same width as the cake tin you’ll be using.

Lastly, we inserted two wooden skewers into the fondant on either side (4 in total). This is so the cake topper can be inserted into the cake at the end.

Then we put the cake topper aside to dry for a few days so it would go hard. You have to make this part in advance, or you’ll have a floppy rainbow that won’t stand up. 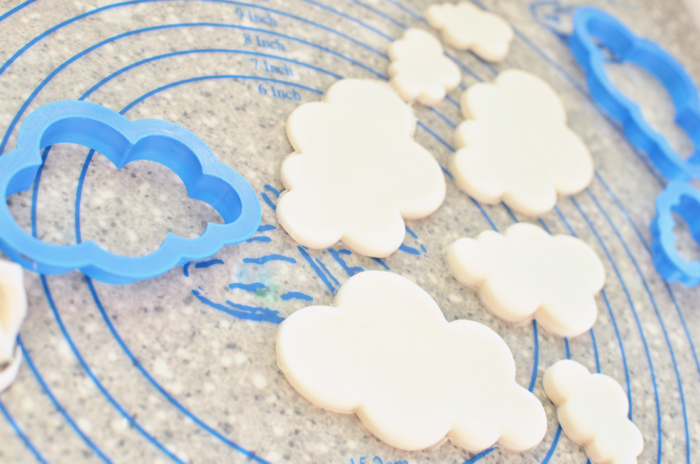 We also cut out a couple of clouds from white fondant and put them aside to dry as well. You only need two hard clouds for your rainbow (the rest need to be soft so they can curve onto the sides of the cake, so make those at the end). It’s a good idea to have a couple of spares though, in case one cracks.

Using our leftover coloured fondant and our butterfly cutter, we cut out some butterfly shapes. We did about three in each colour, although we didn’t end up using them all. It’s good to have spares though in case of mishaps.

We wanted to dry the butterflies with their wings pointing up in a V-shape. You can dry them over the corner of a box, or just cobble together whatever you have on hand. We used cling wrap folded into a wedge, and a skewer on a rolling pin. Or you could fold some cardboard in half and wedge it into a narrow container to make that “V-shape”, like I did in this post where I made butterflies from air-dried clay.

We then set the butterflies aside to dry and harden.

We used a white chocolate mud cake for this recipe. Mud cake is best because it’s nice and dense, so it stacks really well. It also keeps for ages, so you can make it in advance!

My friend made two mud cakes, and then cut each of them in half to make a four-layer cake. (In the next step we added buttercream between each layer.) The layers create a lovely tall cake. It looks so much more professional when you add some height.

Here is the recipe for the mud cake. This recipe makes ONE cake, so make sure you DOUBLE the recipe if you wish to make two cakes, like we did.

We used a 4 inch high, 7 inch round cake tin for this recipe to create a narrow, tall cake, and there was a little batter left over.

We then cut each cake in half and trimmed off the very top to make them even and flat.

We took half the buttercream (one 500g tub) and split it into three. We added a different colour to each portion, then whipped it in a Kitchen Aid mixer to incorporate the colour and make it nice and fluffy. 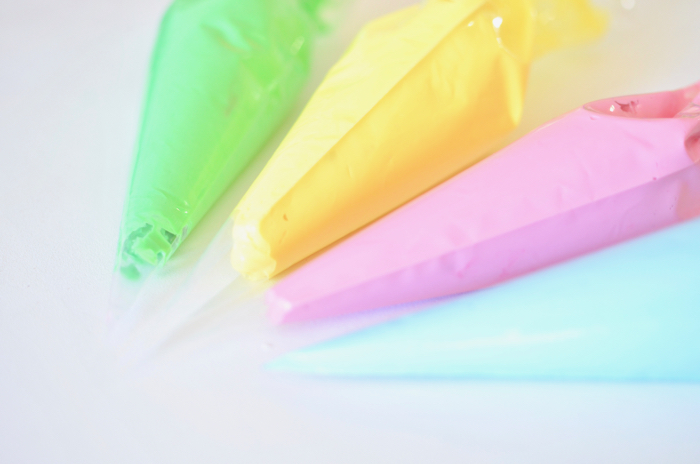 Then my clever friend piped the cream onto each layer, smoothing it as she went. For this step we placed the cake on a board and put it on a turntable, which makes it a lot easier to glide effortlessly around the cake.

She used her spirit level to check that the layers were even as she went. If it’s going slightly wonky, you can add more buttercream on one side. She used the cake scraper to remove the excess.

The remaining buttercream was whipped and tinted blue. It was then piped all over the cake. While turning the turntable with one hand, the other hand smooths the buttercream with a cake scraper. My friend was able to achieve an amazingly smooth finish using this method.

We then placed the cake in the fridge overnight. The buttercream sets quite hard and waxy as it cools. I took it out of the fridge a few hours before the party so that the buttercream would soften enough for the fondant decorations to stick to it, and so it would be easy to cut.

I cut some more clouds from white fondant and stuck them to the sides. They stick straight onto the buttercream without the need for water or sugar glue.

Then it’s time to add your rainbow topper, which should be nice and hard by now after sitting aside for a couple of days.

Make sure you wait until your buttercream has softened before you try to add this. I didn’t… and I was surprised how hard buttercream actually gets after being in the fridge. The cake had become quite hard as well. I struggled to stick the skewers in, and made a crack in my pretty rainbow. Luckily I had a cloud to cover it up with.

The clouds were adhered to the rainbow with a piece of soft fondant. 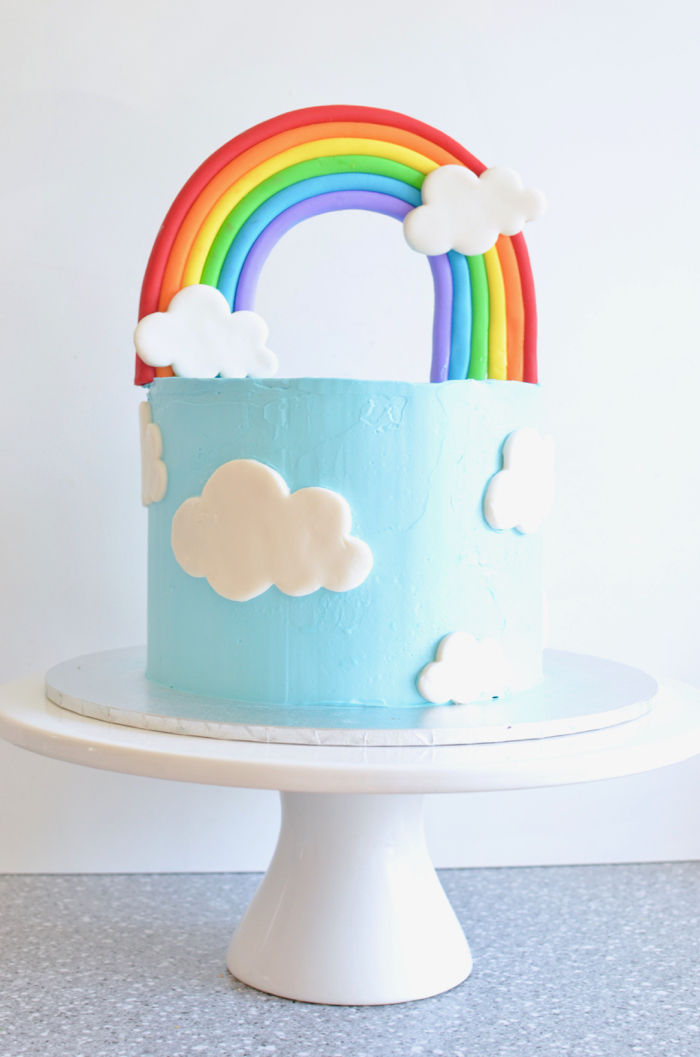 It was already looking so pretty at this point! And I will not lie, I was sweating bullets. Remember, I was flying solo for this part, and I was SO scared I was going to stuff it up!

Luckily, adding the butterflies proved to be super easy. I just lightly pressed them onto the buttercream and they sat in place beautifully. 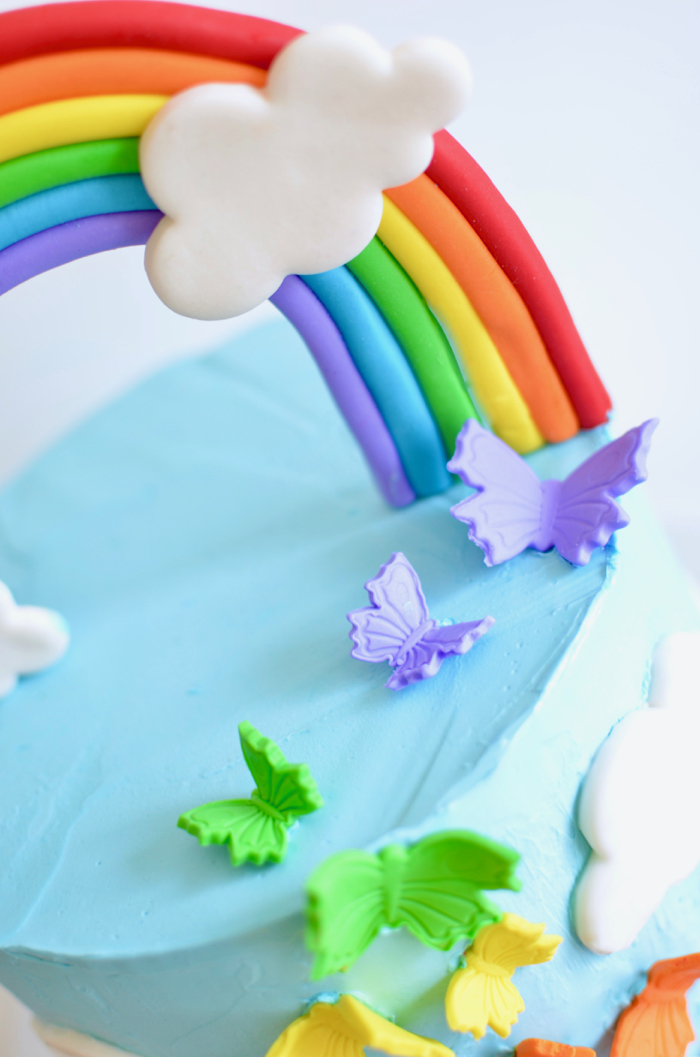 I arranged the butterflies in rainbow order (we skipped blue for these, since the cake was blue.) I wanted them to look like they were flying up through the sky, so I placed them in a sweeping curve, with a mix of large and small. 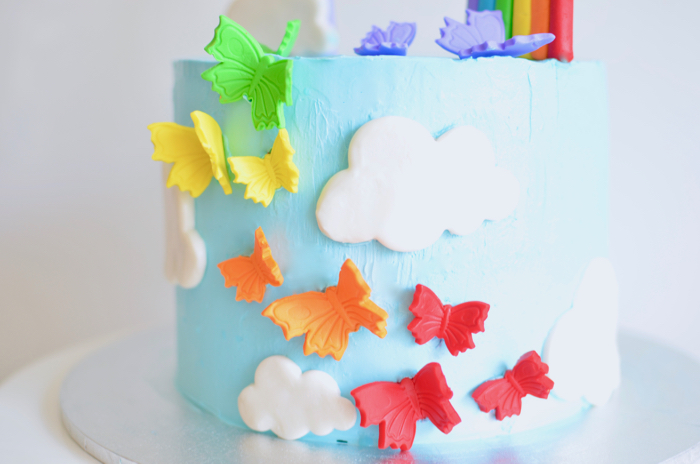 And that was it – the finished cake!! 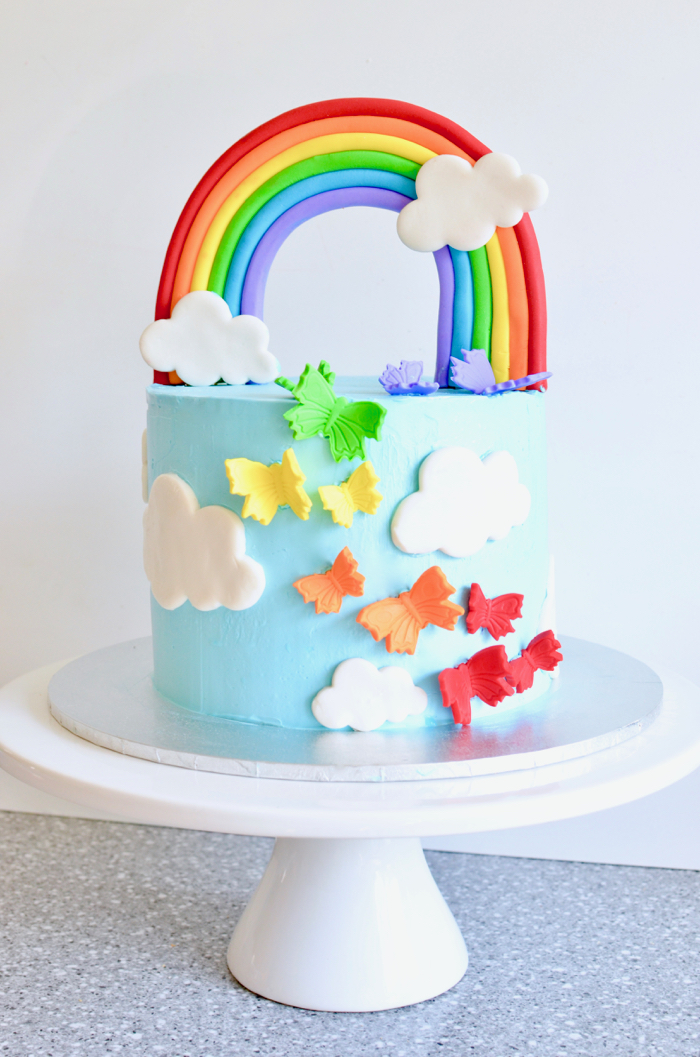 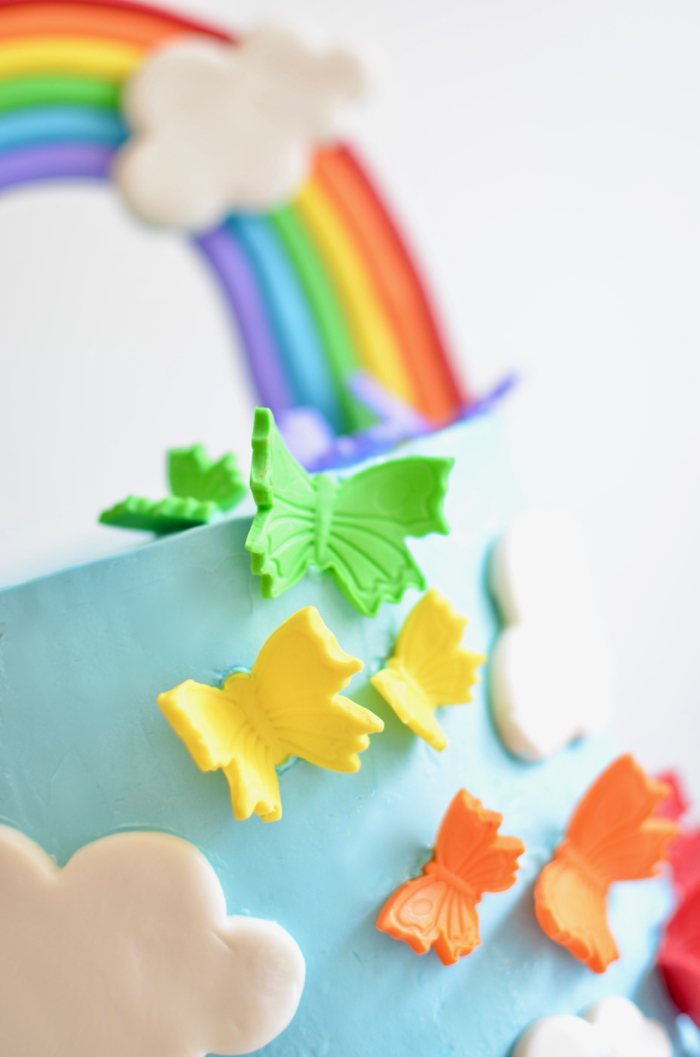 The colours were so vibrant… perfect for our rainbow party! 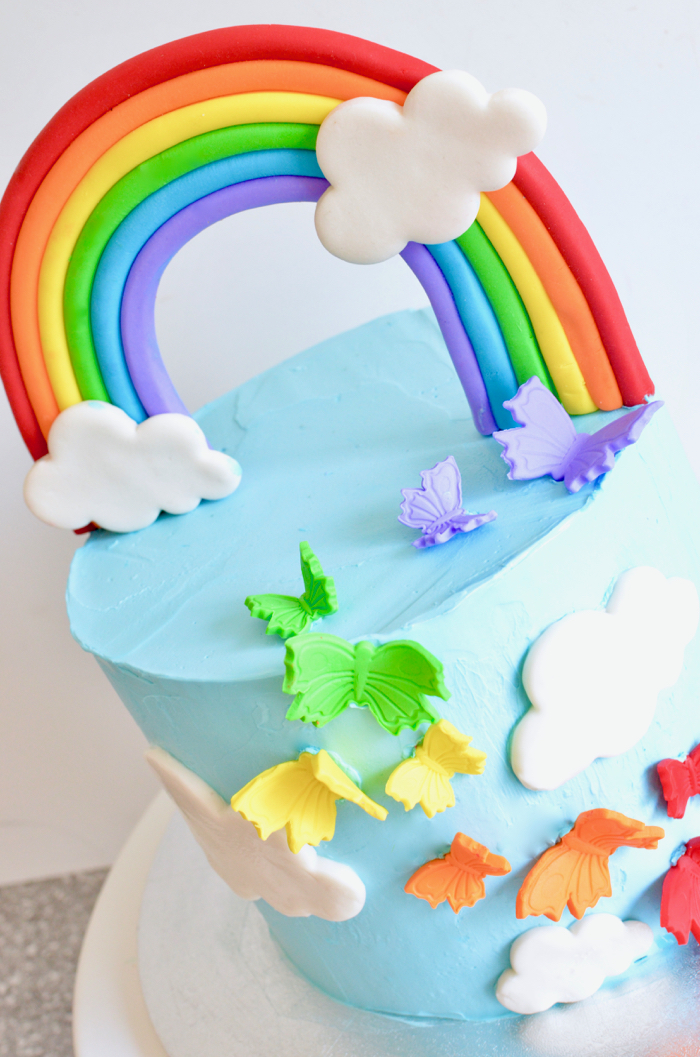 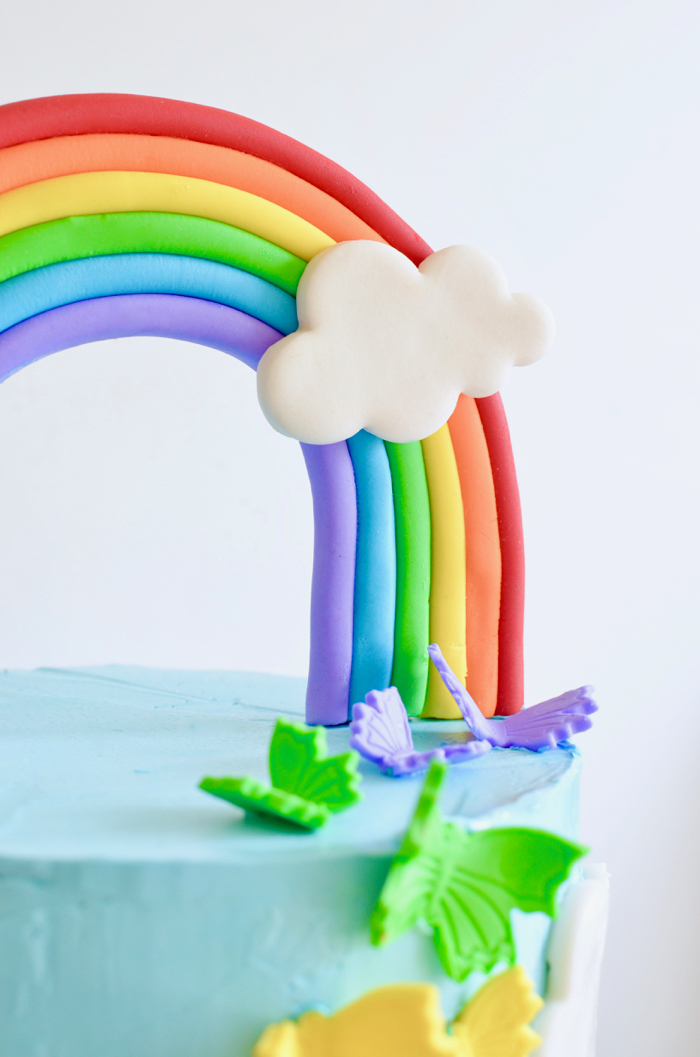 I was so thrilled with how pretty this cake turned out. My friend is a genius, and I was so lucky to get a glimpse into her process… and even “help” a little bit.

I’m starting to believe that even I might be able to decorate a real cake, now that I know some of the tricks and tools to use. The whole process still seems kind of magical to me, but I’ve had a glimpse backstage at the magician’s secrets, and it is just so interesting to learn how it’s done!

What do you think? Would you try it?

Wishing you a house full of sunshine! 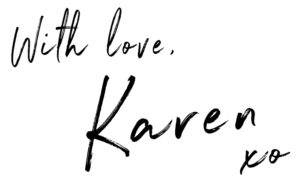